Have you ever seen a ski jump? Sapporo Winter Sports Museum


But until this September, I had never seen a ski jump.

A little ways from downtown Sapporo, on Okurayama, the Winter Sports Museum has artifacts and interactive stations about the games held in the cold part of year. The best part of the museum for me, though, turned out to be seeing this: 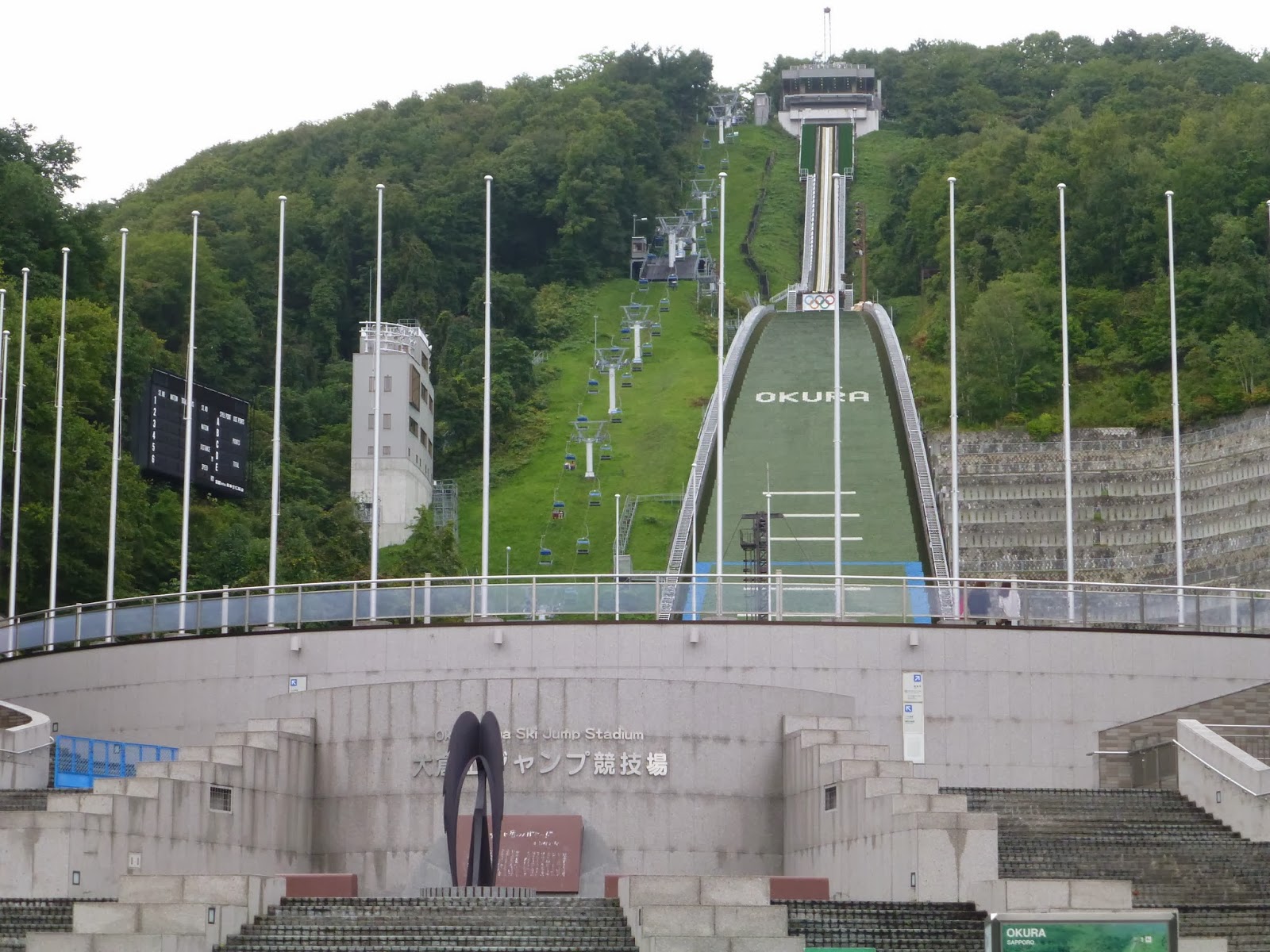 I don't watch the Olympics on TV very much. I'm just too busy. And it seems that most of the events will start around 1:00 or 2:00 in the morning this year. But I had never really imagined what a ski jump site really looks like in person - without the snow. 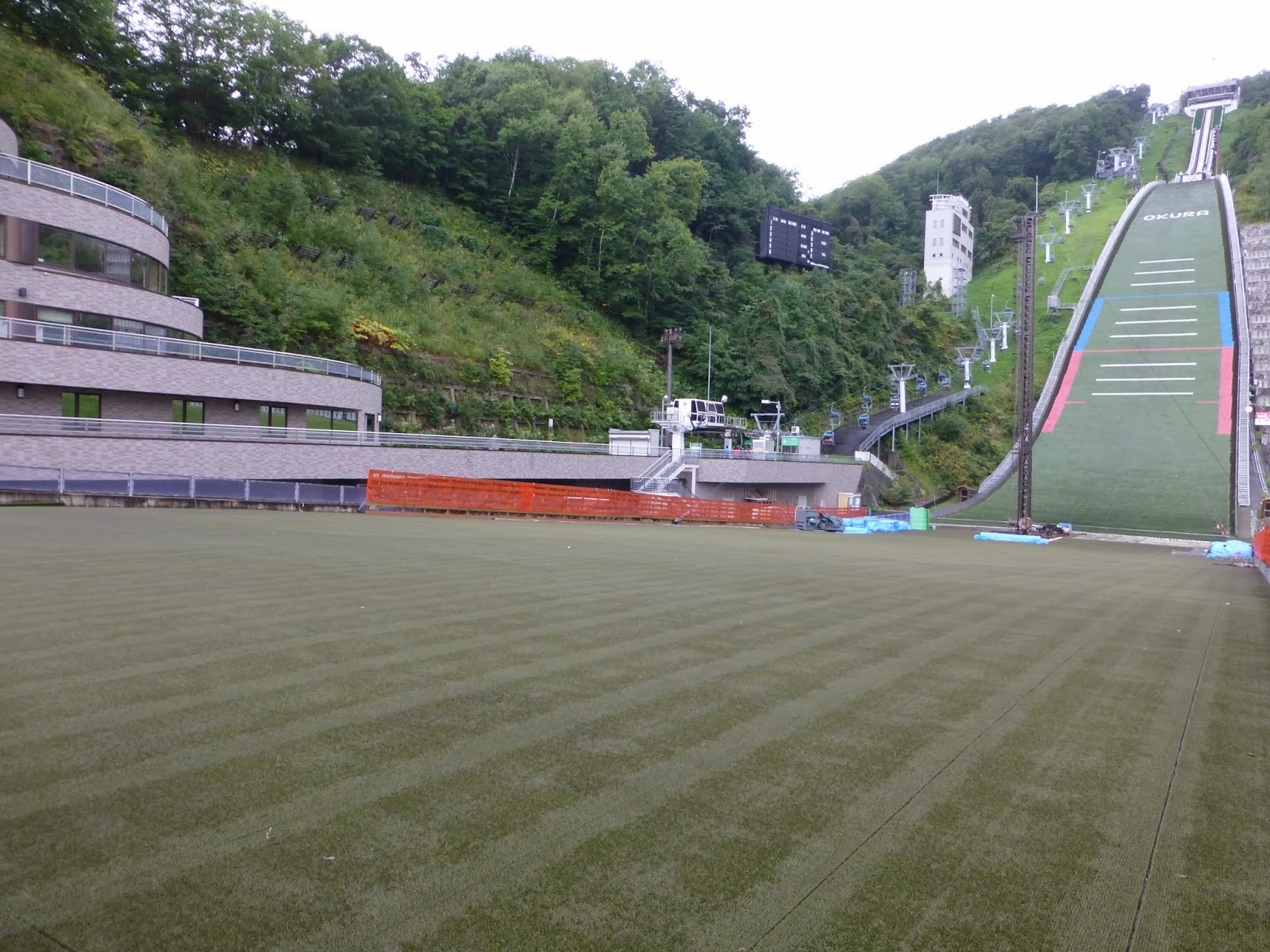 It turns out that the entire complex is just a long, narrow line up the hill. There are judges' and press buildings along the side (including up the mountain), and the giant scoreboard up in the hillside. The landing area is on the hill with a modest flat area (actually, it slopes back up) for the skiier to stop. 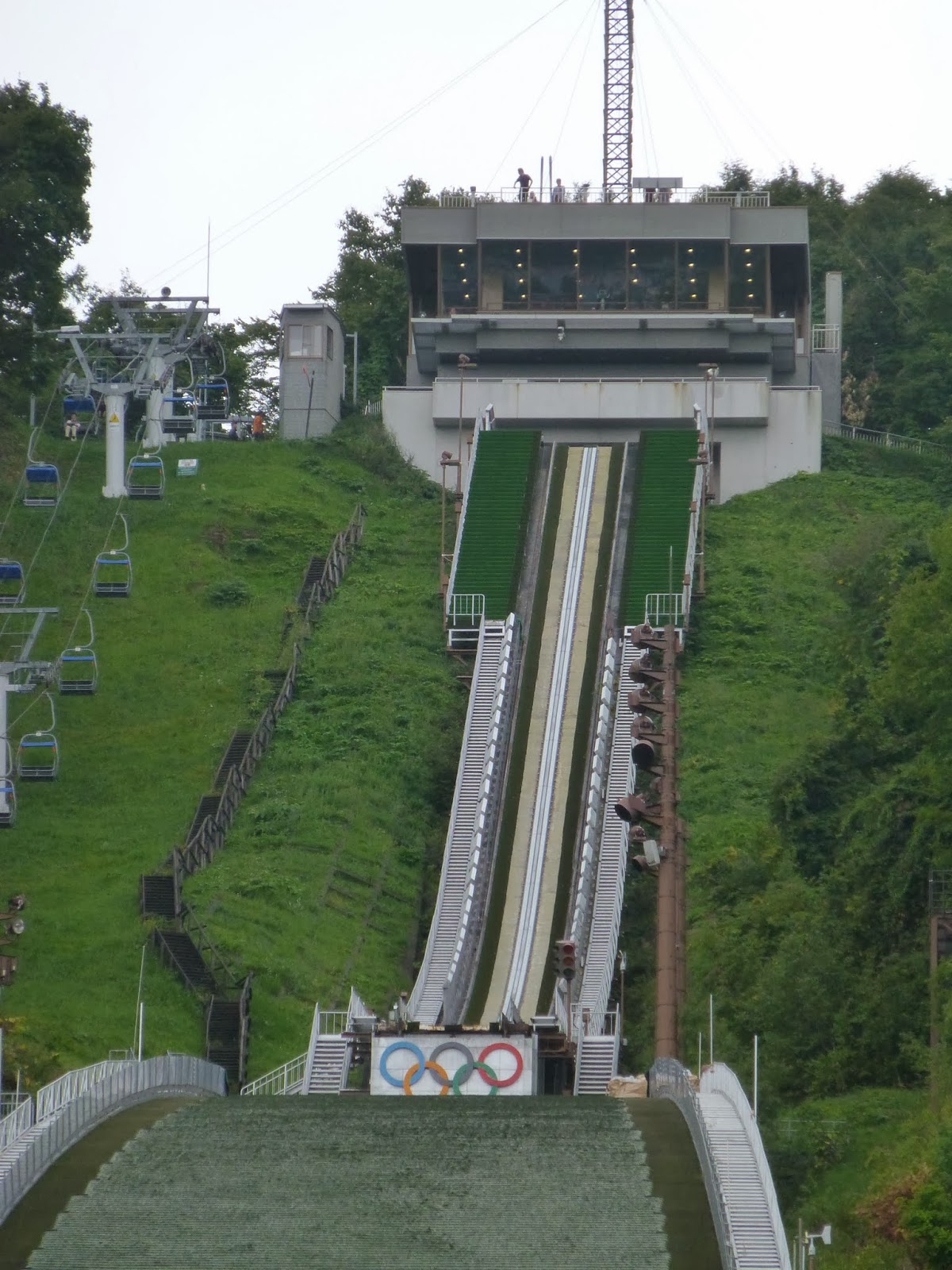 The launch is simply two narrow tracks - one for each ski. The skiier doesn't have to do too much to stay in line. And they get a nice lift back to the top. 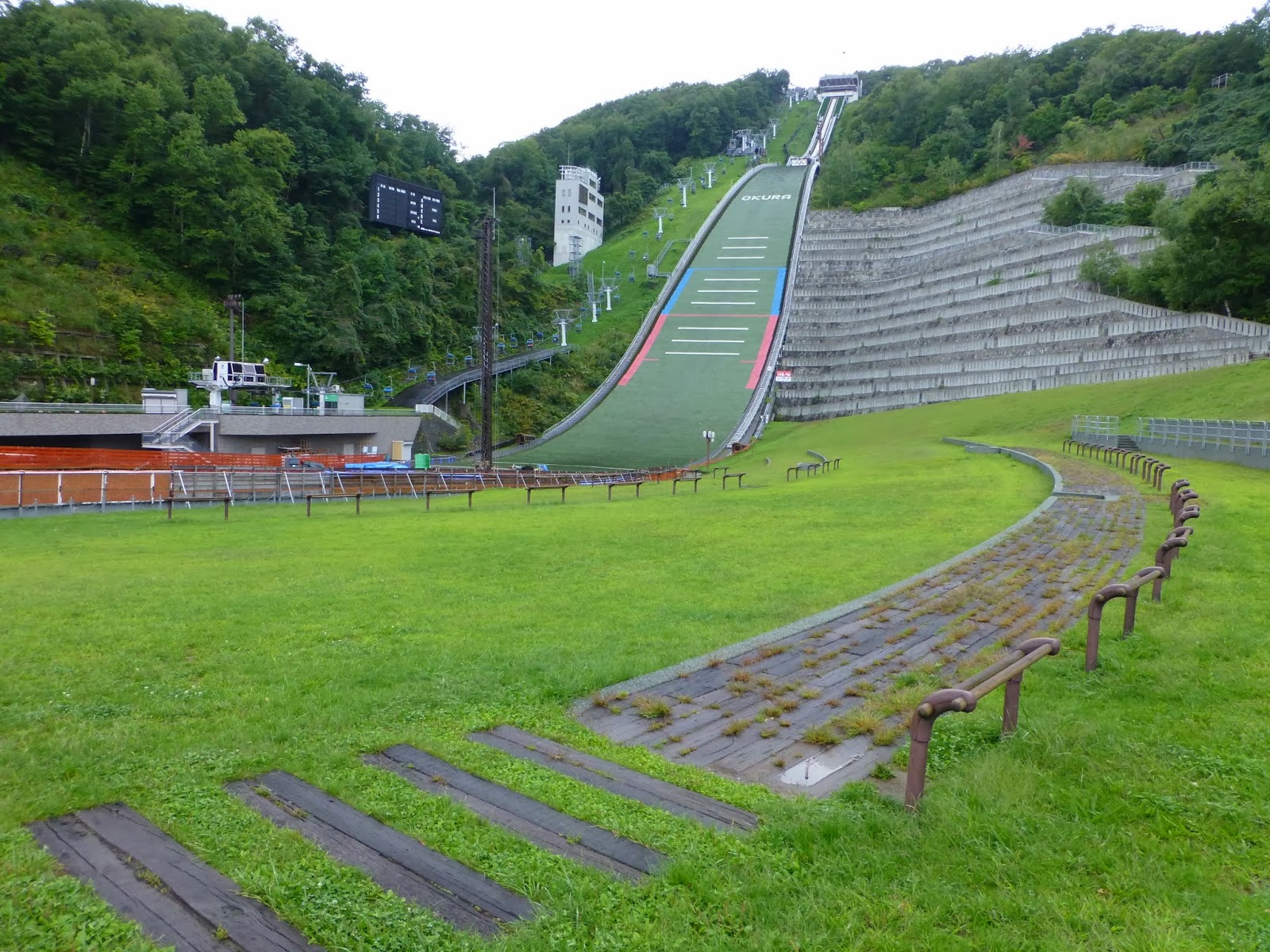 An area for spectators is on the right side and I'm sure the views are great from any "seat". 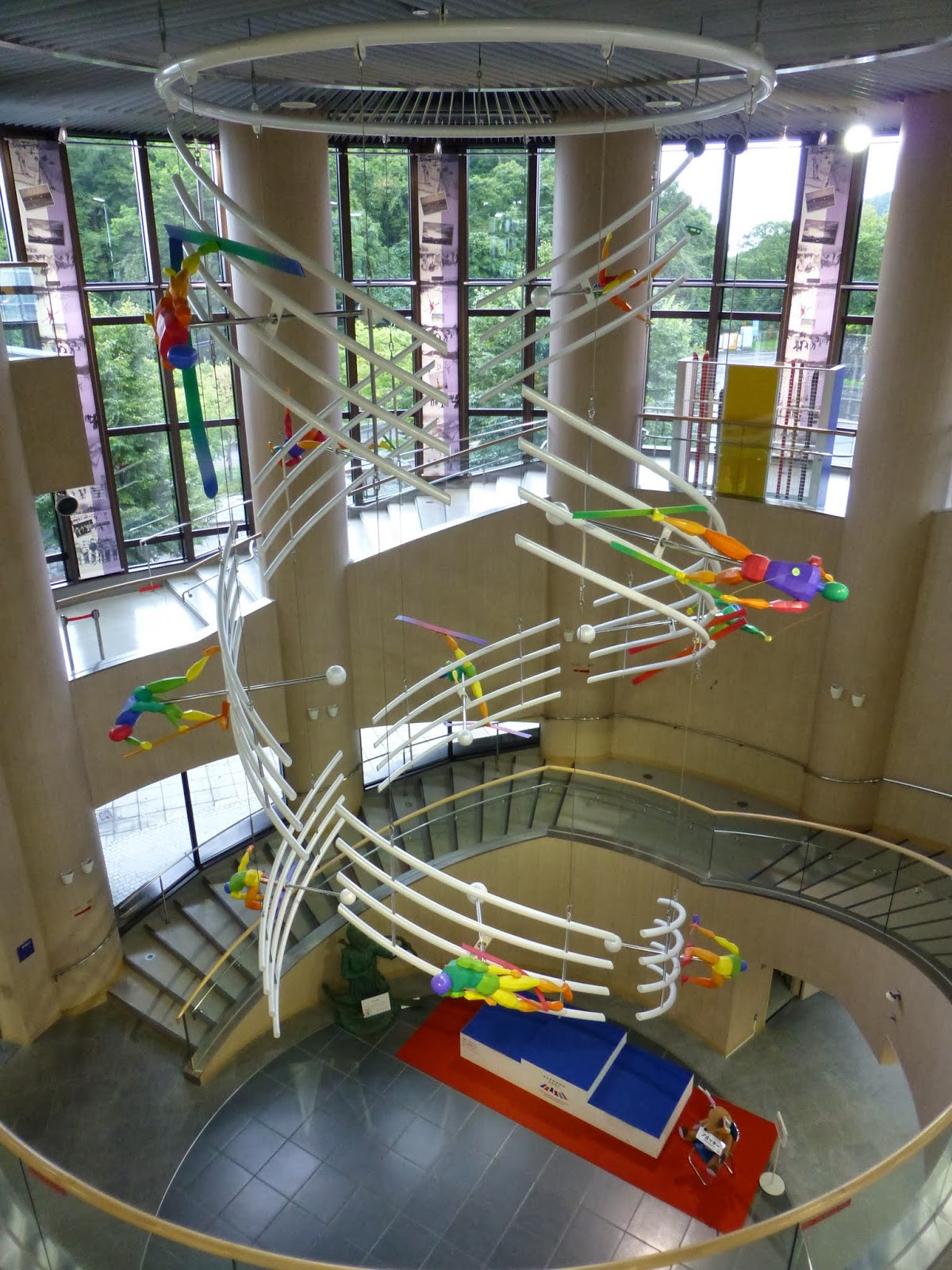 Inside the museum, at the base of the jump, you get a nice skiing sculpture. 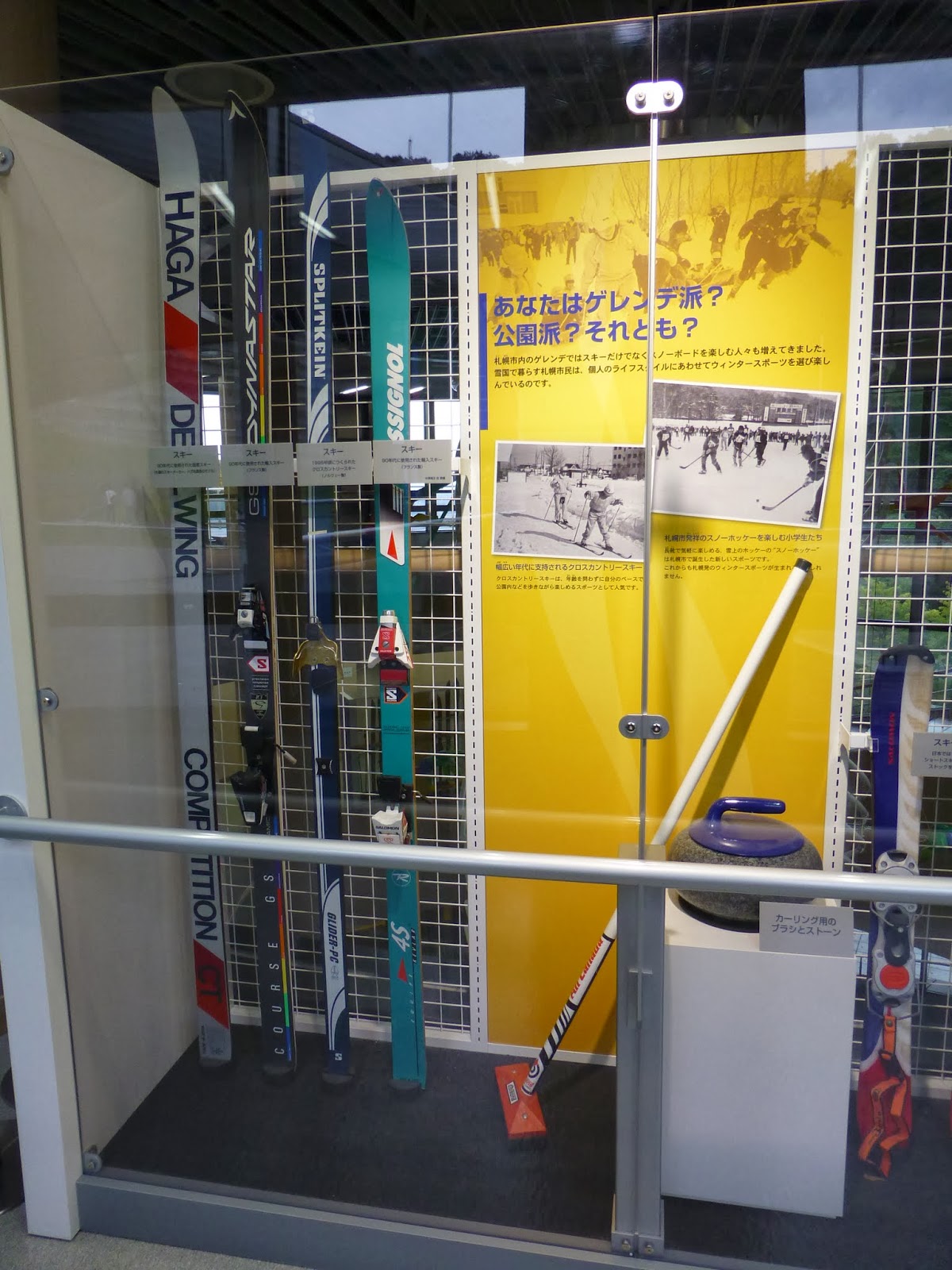 You start upstairs in the exhibit zone. Skiing is the most prominent sport on display here. There is equipment from other sports as well (see the curling broom and puck on the right). 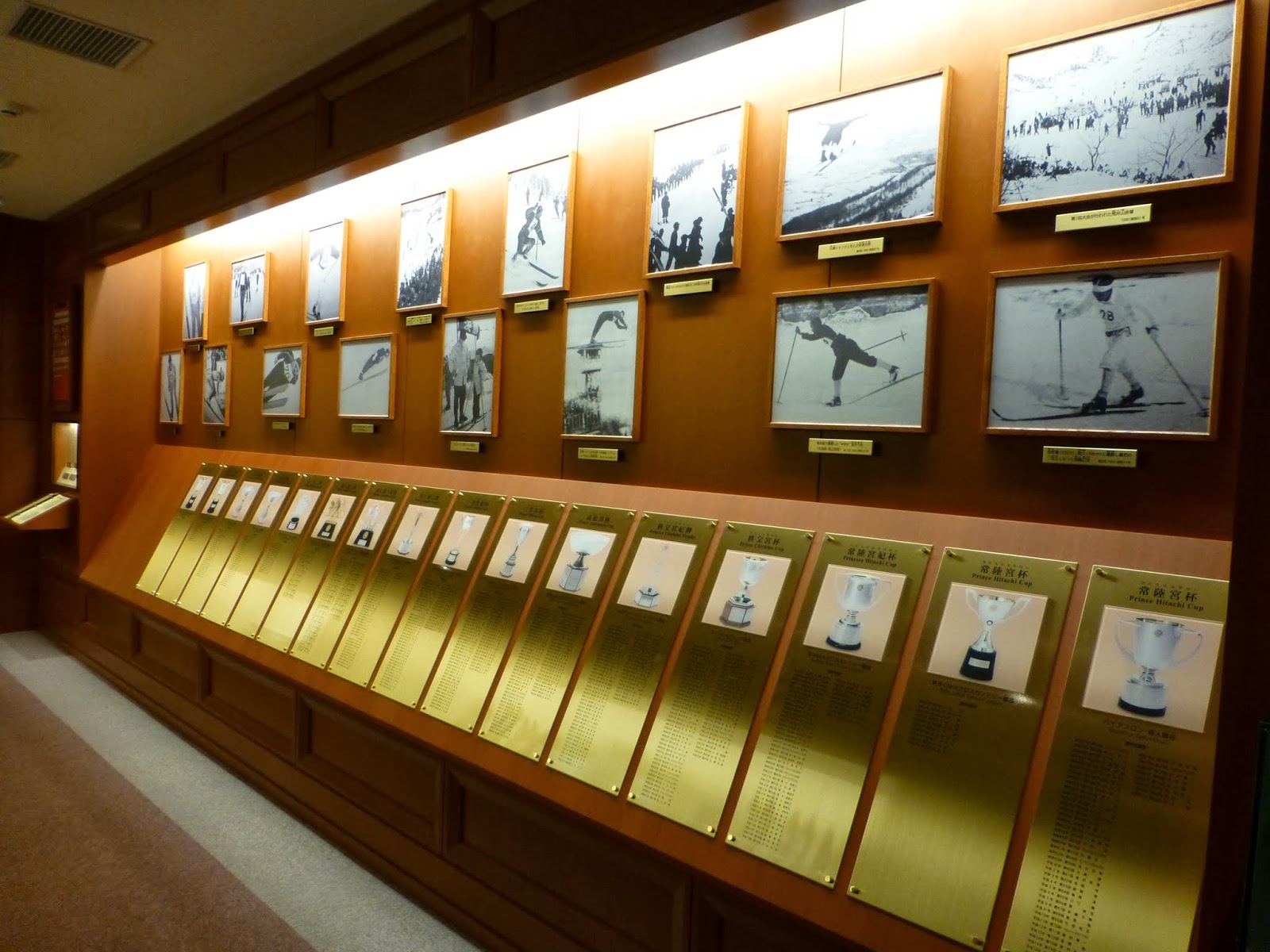 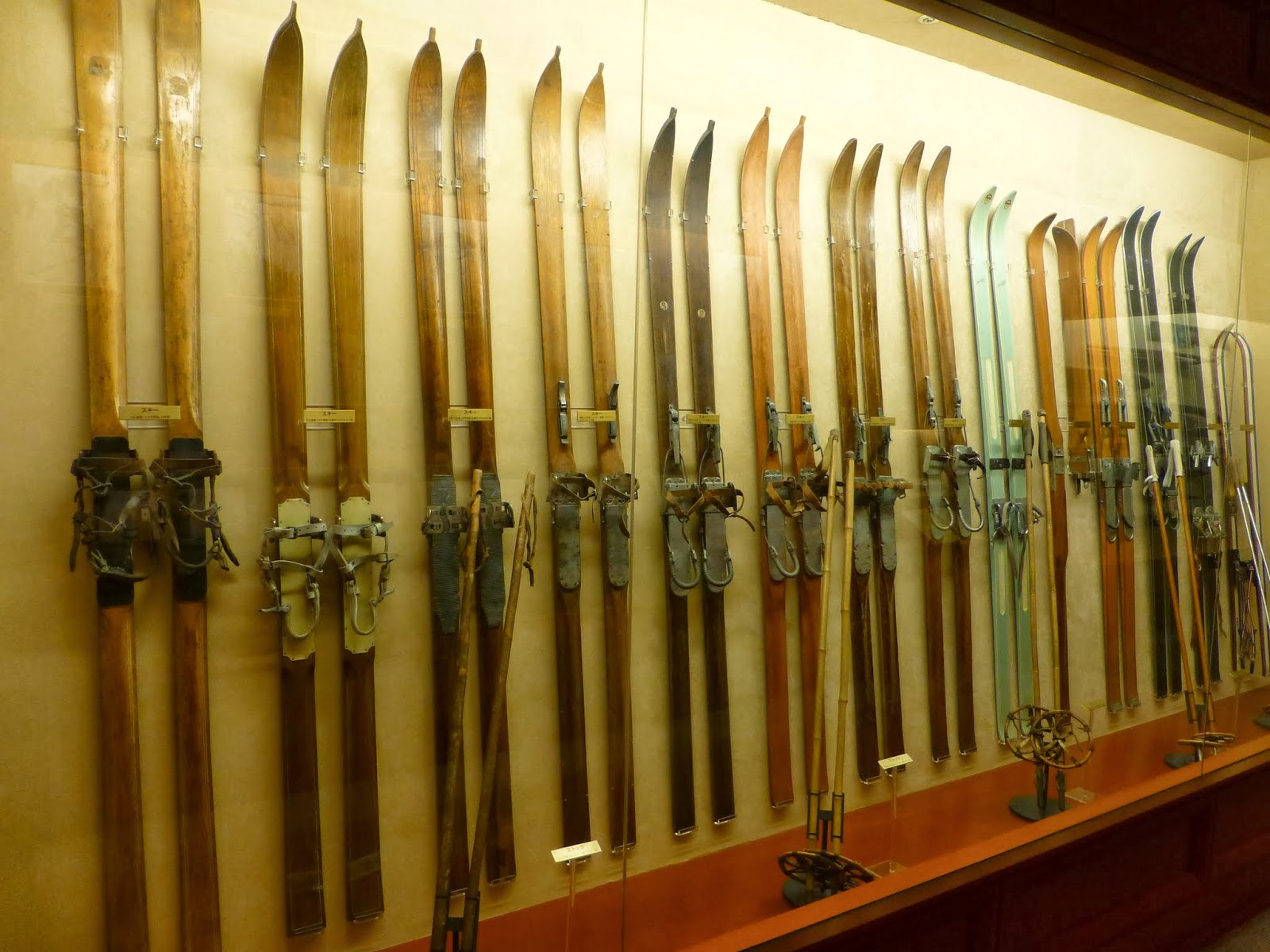 A lot of old skis are on display, but I'm not sure if they're from famous skiiers or just leftovers from days past. 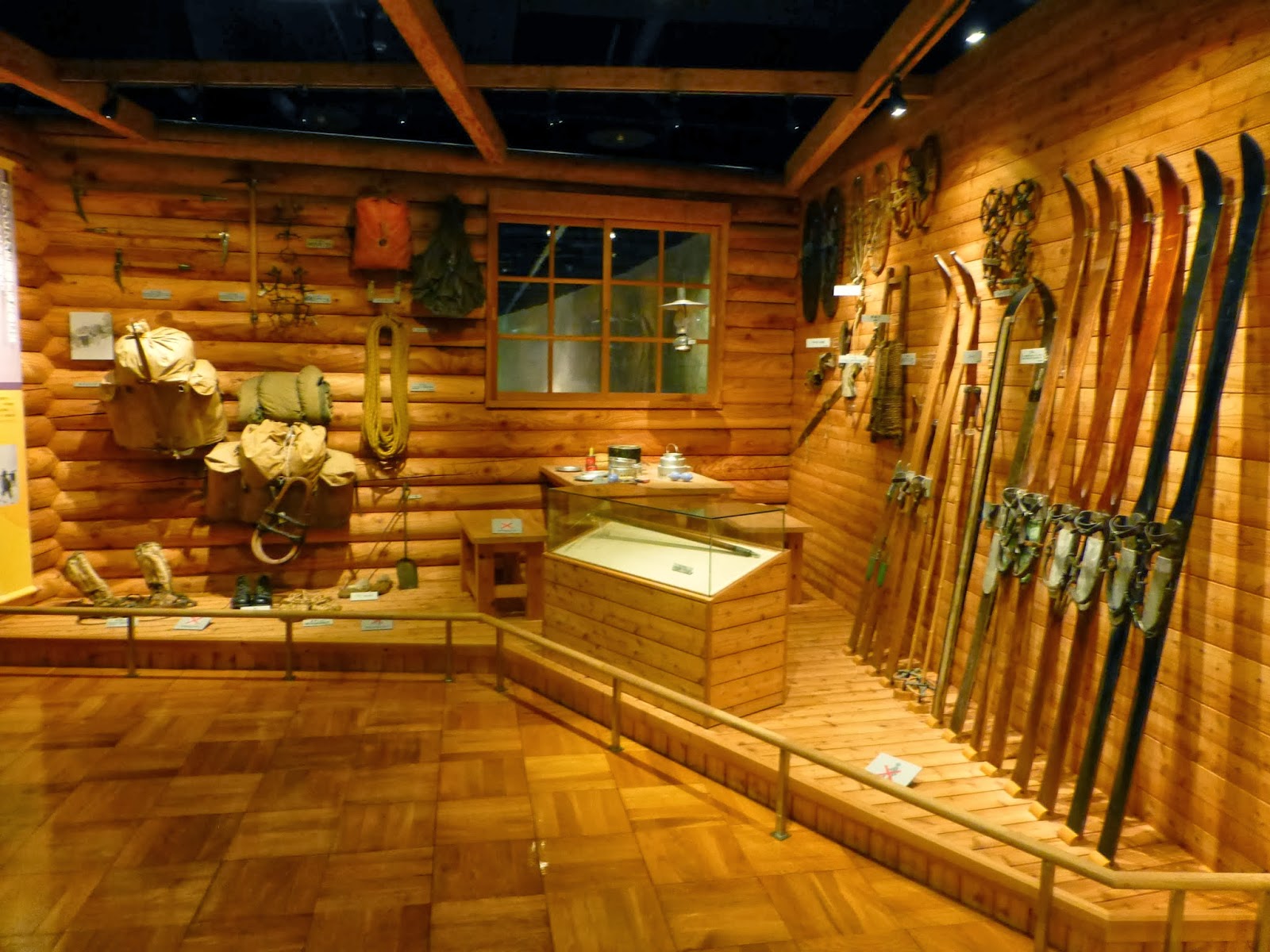 At the end of the display on the history of skiing in Japan, visitors find a mock-up of a cabin with some more skis and other winter gear. 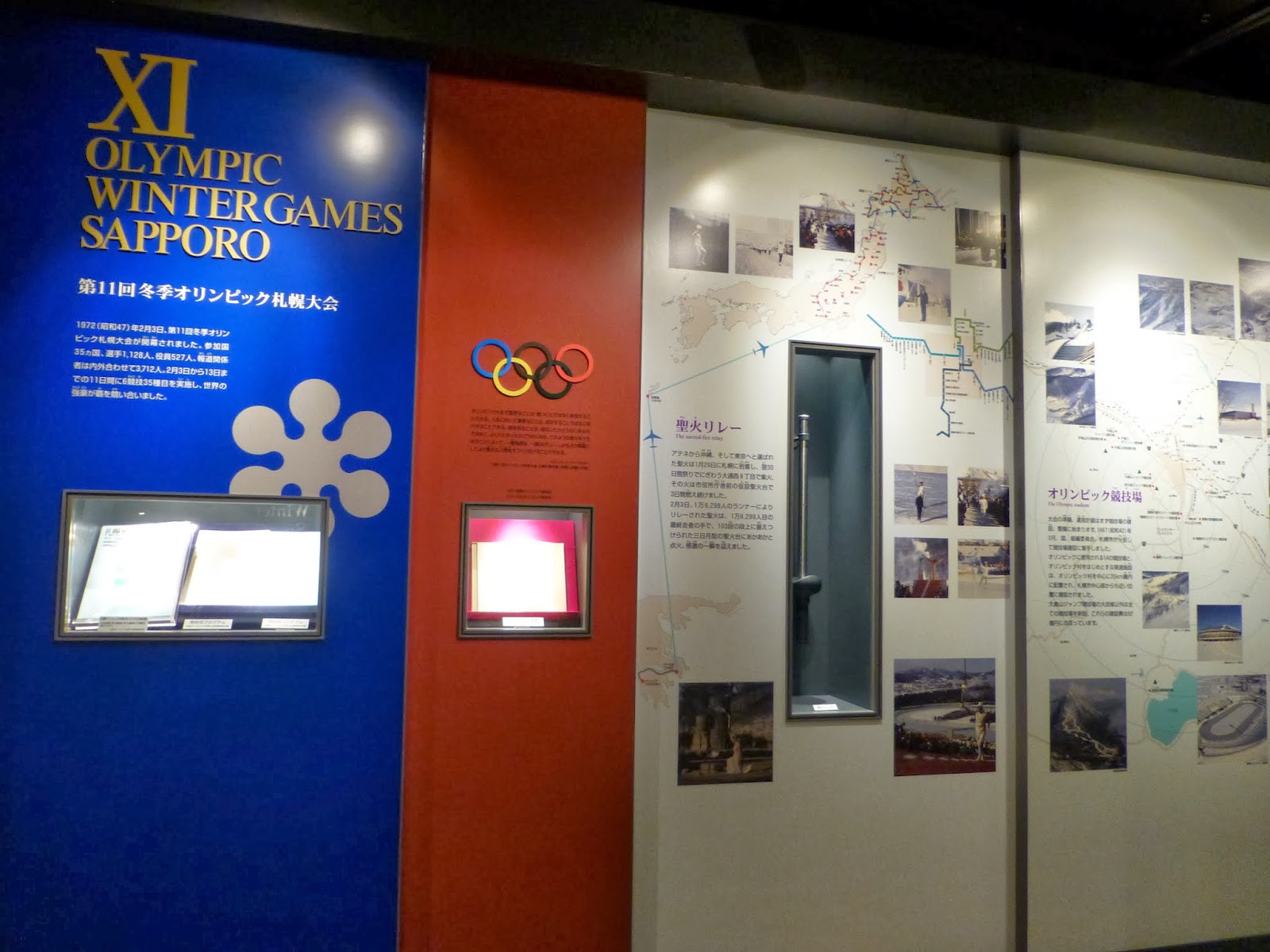 But what about the Olympics? There's a long wall with lots of information on the locations used in the 11th Winter Games (1972). The ski jump and museum exists because of the 1972 Olympics, although the museum is about winter sports in general, not just the Olympics. 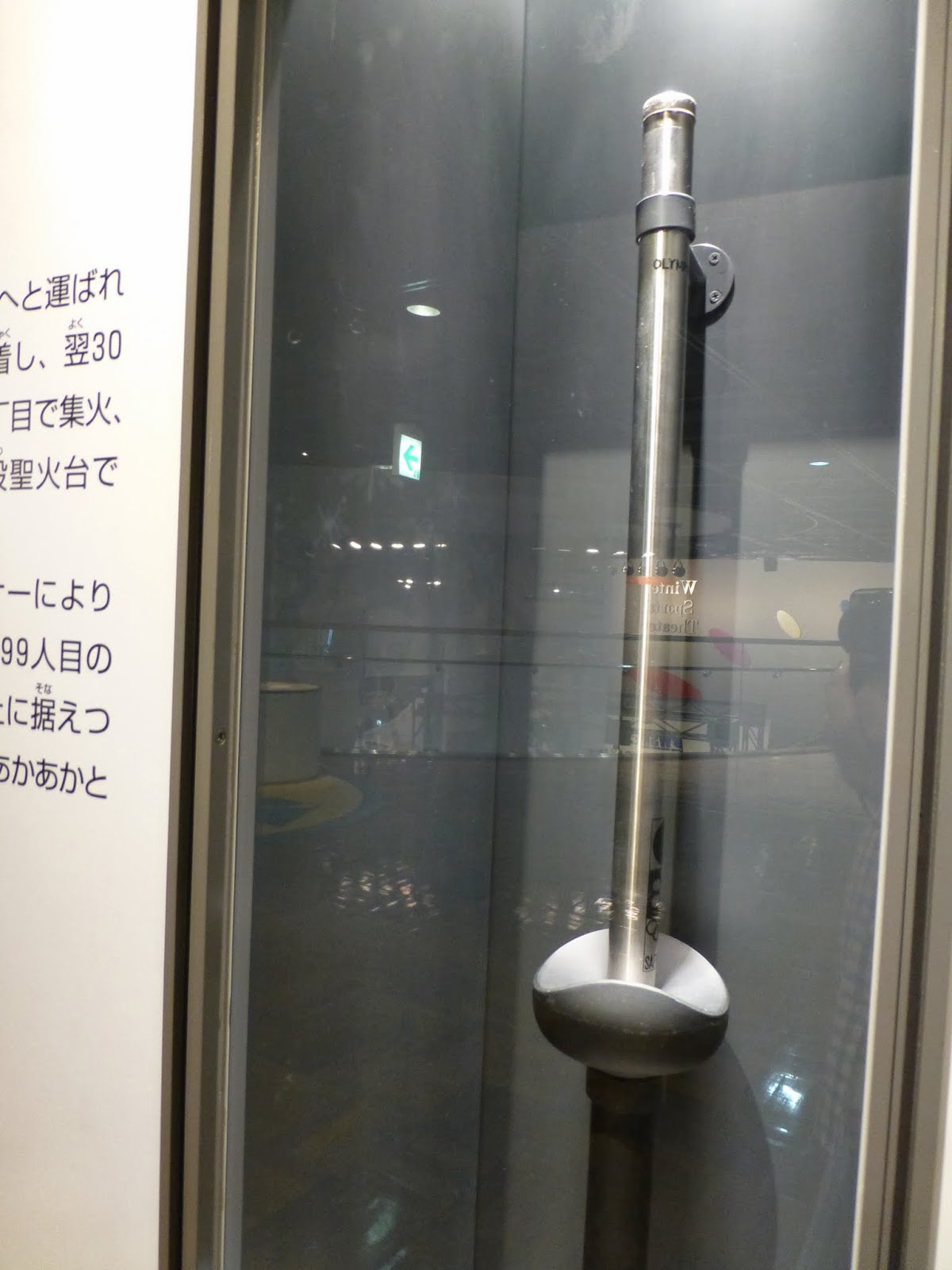 You can also see a torch. 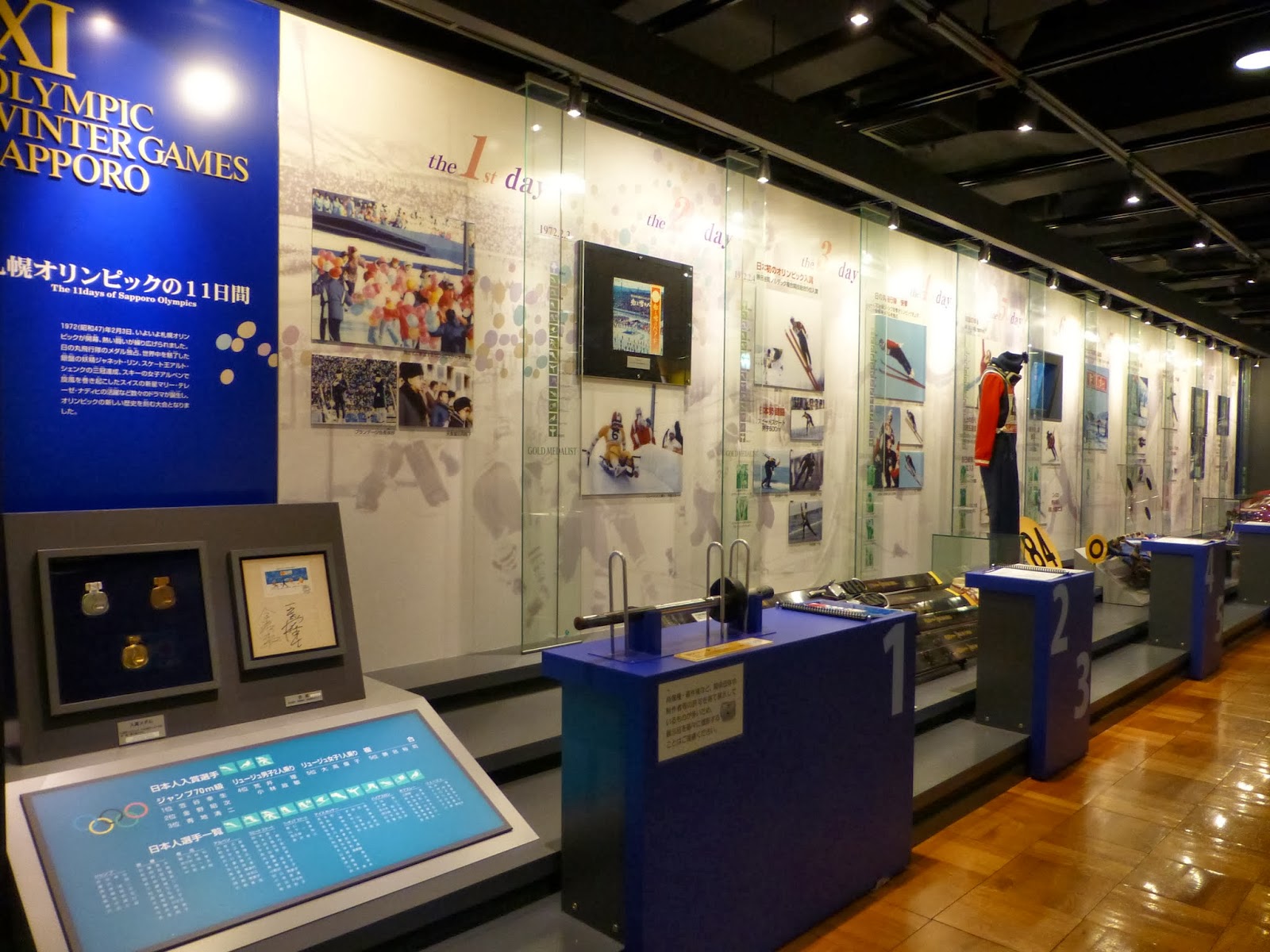 The games themselves are can be viewed along another long wall. 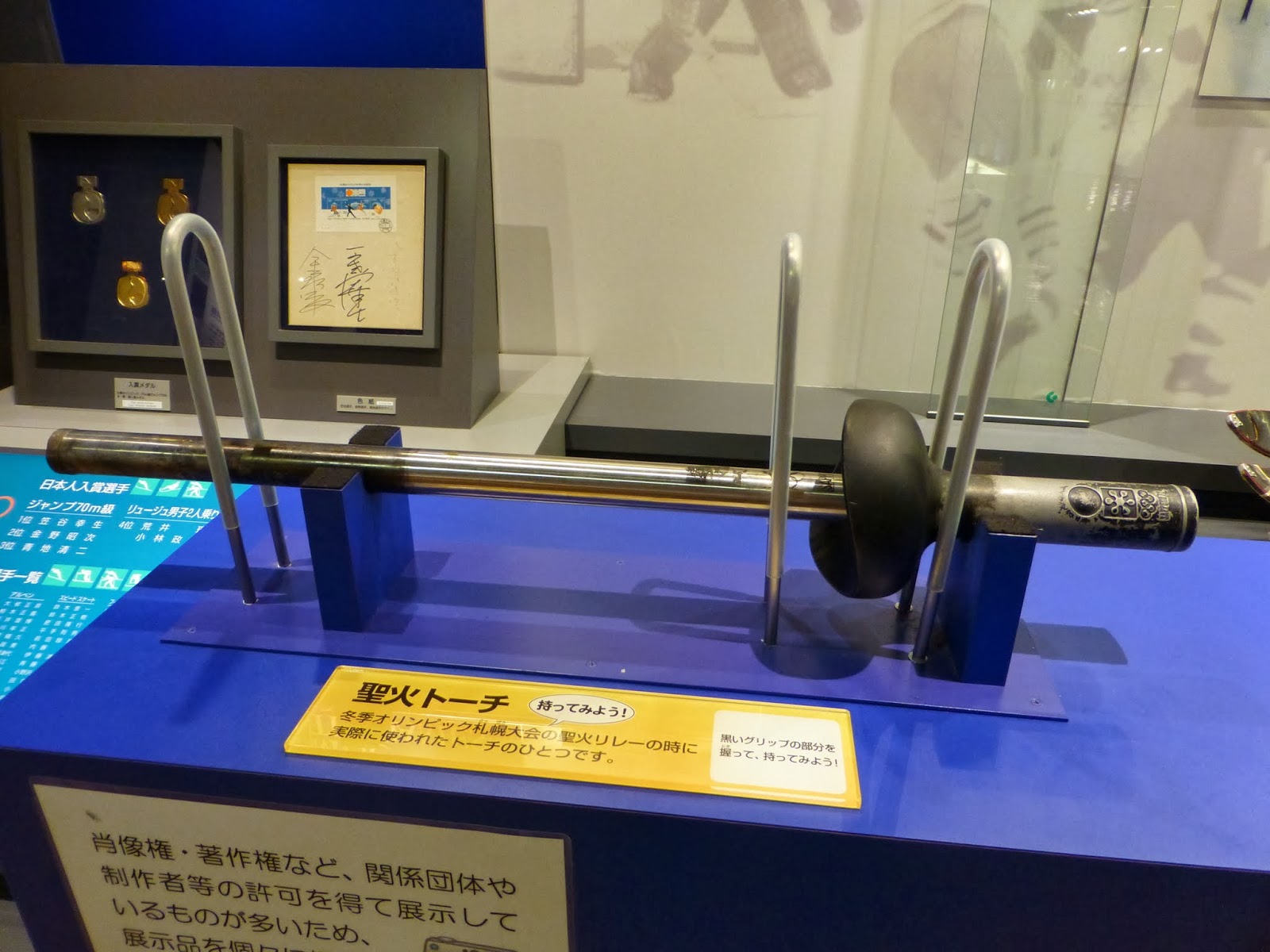 It is along this wall you can lift a real torch. There are several hands-on exhibits. 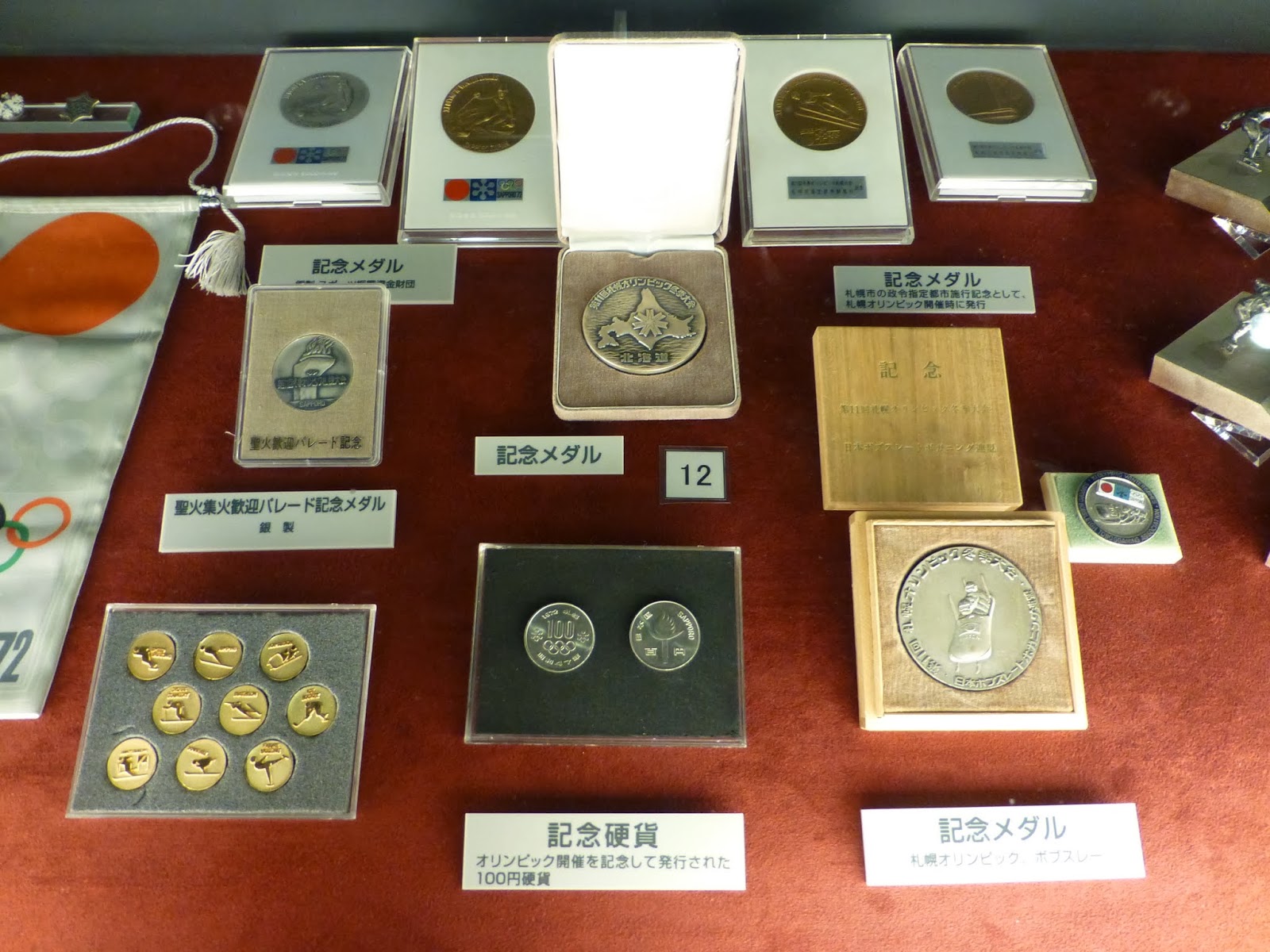 A display case full of medals. Here you can see that the biggest problem with this museum is the lack of English signage. I really wish they'd update the information to make it more foreigner-friendly. 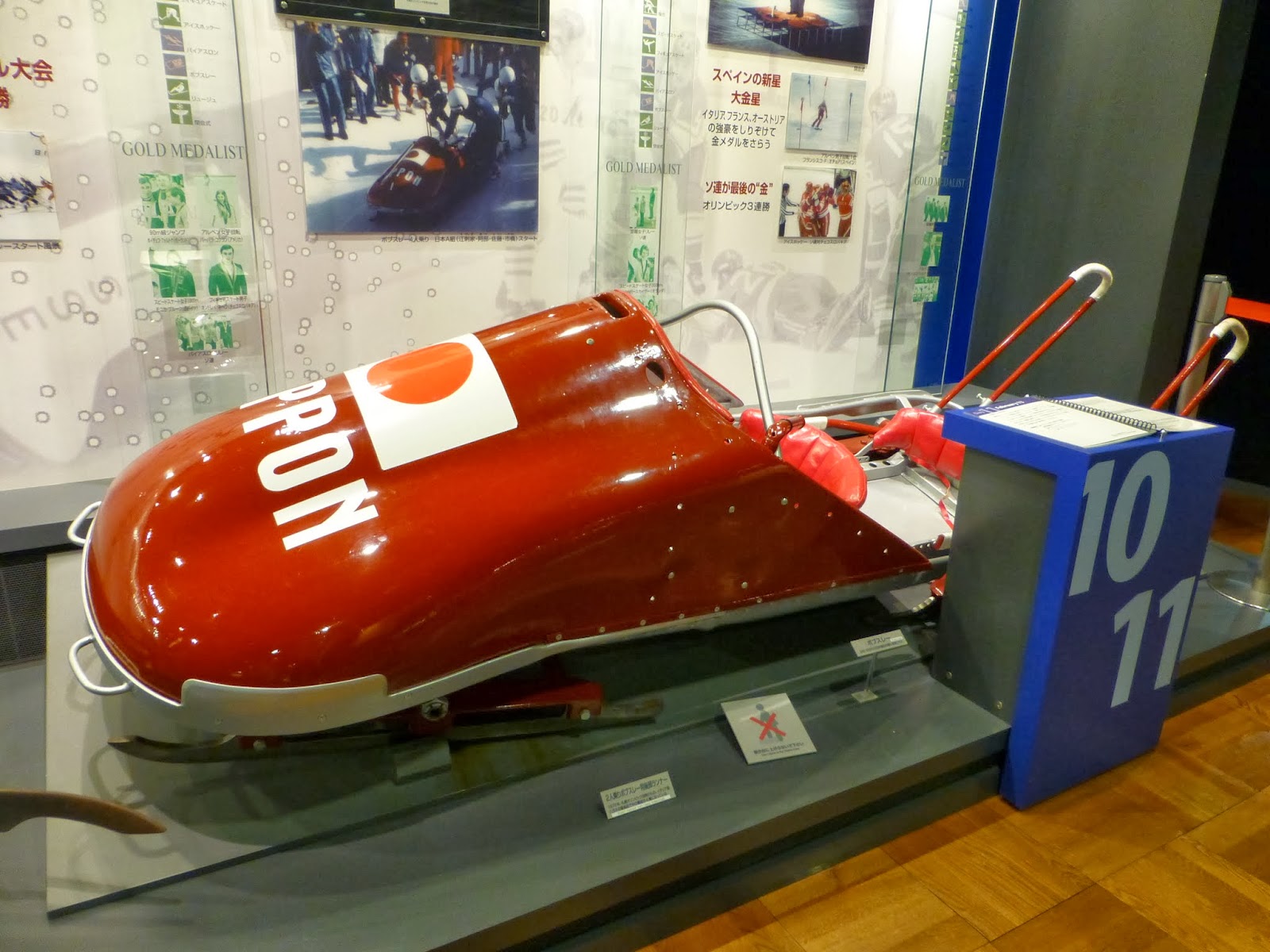 However, the museum more than makes up for it with hands-on displays. I think you are allowed to sit here. 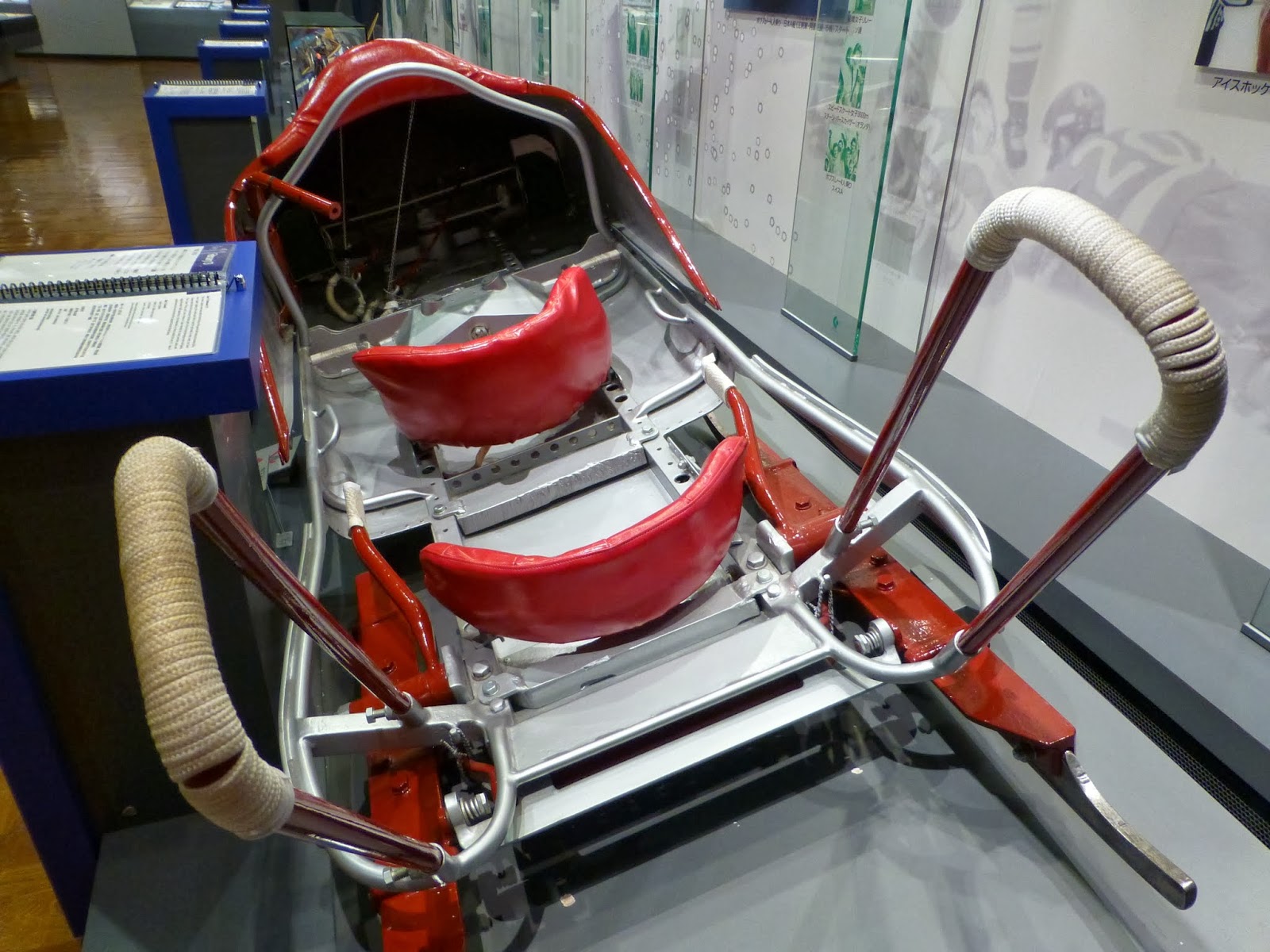 There certainly aren't any signs saying you can't sit in it! 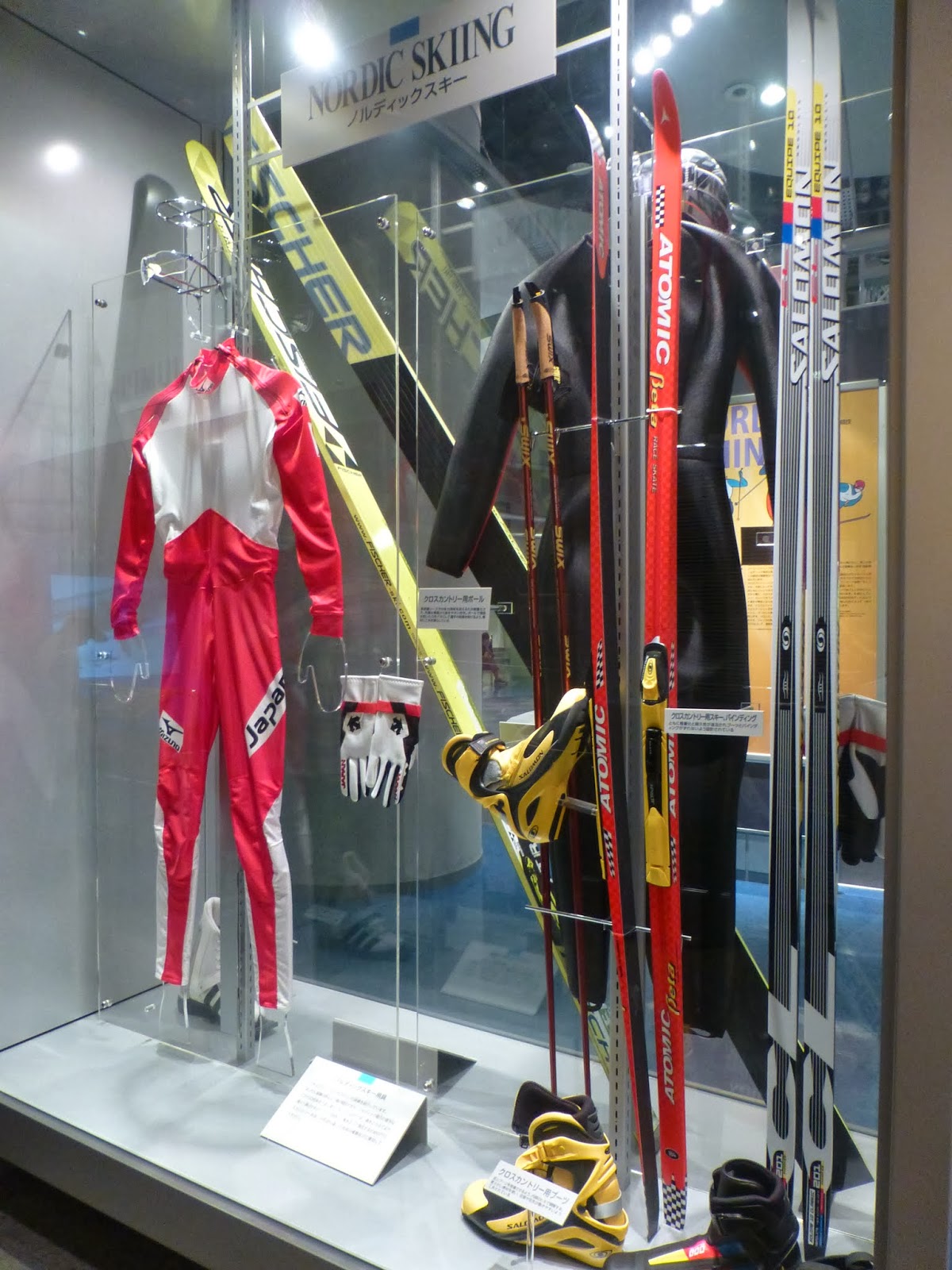 Nordic Skiing display, which is a sport I know nothing about. That can be said about most winter sports at the Olympics. But the uniforms (and how they change) are kinda neat. 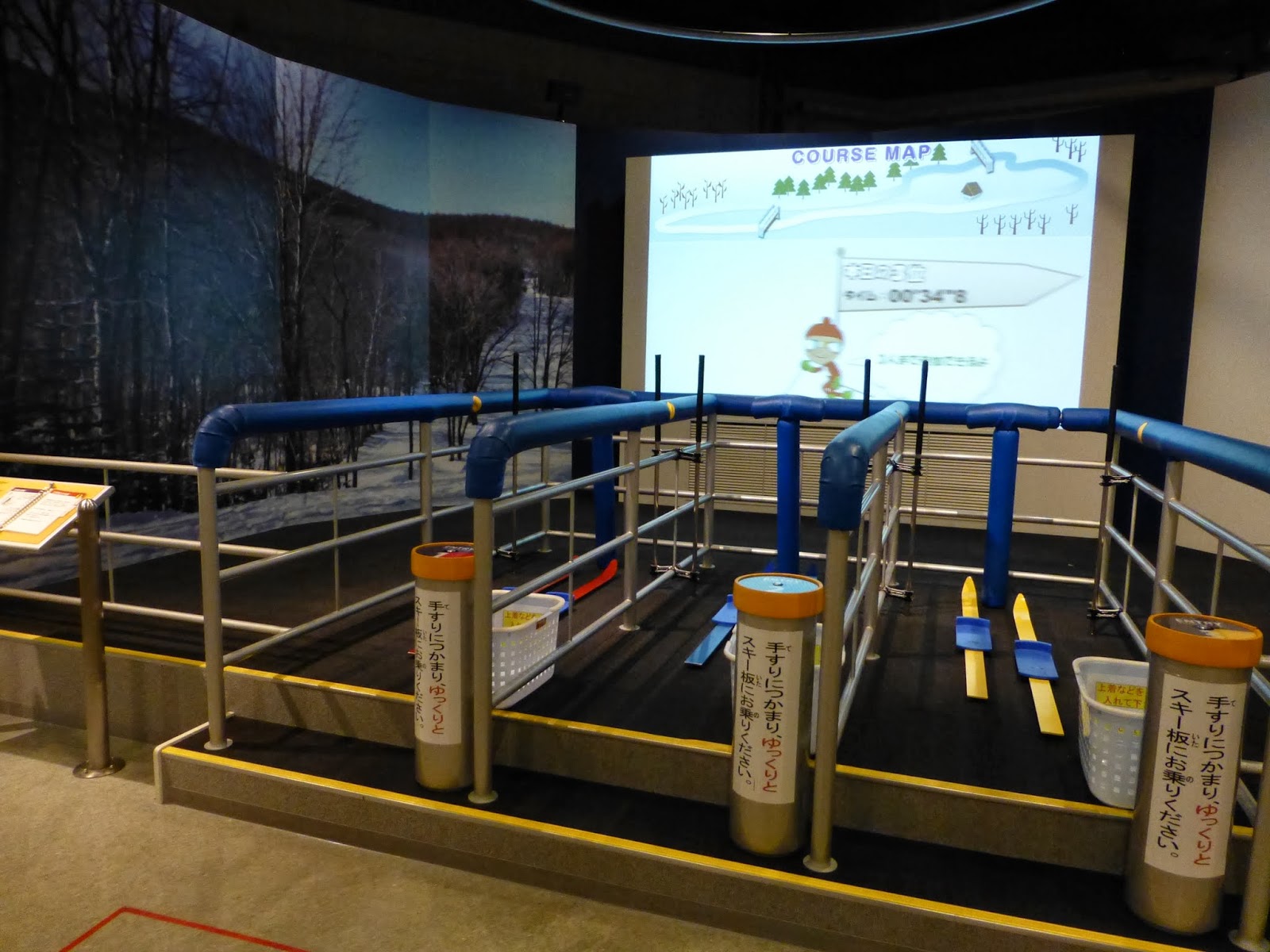 Not only are there hands-on displays throughout the museum, there are several digital games where you can "participate" in Olympic sports, downstairs in the bottom-floor Experience Zone. Some were quite popular, but they all felt a little dated. It would be great if this museum could gather enough funds to update the signage for foreigners (English - even just a real good color pamphlet) and the games. 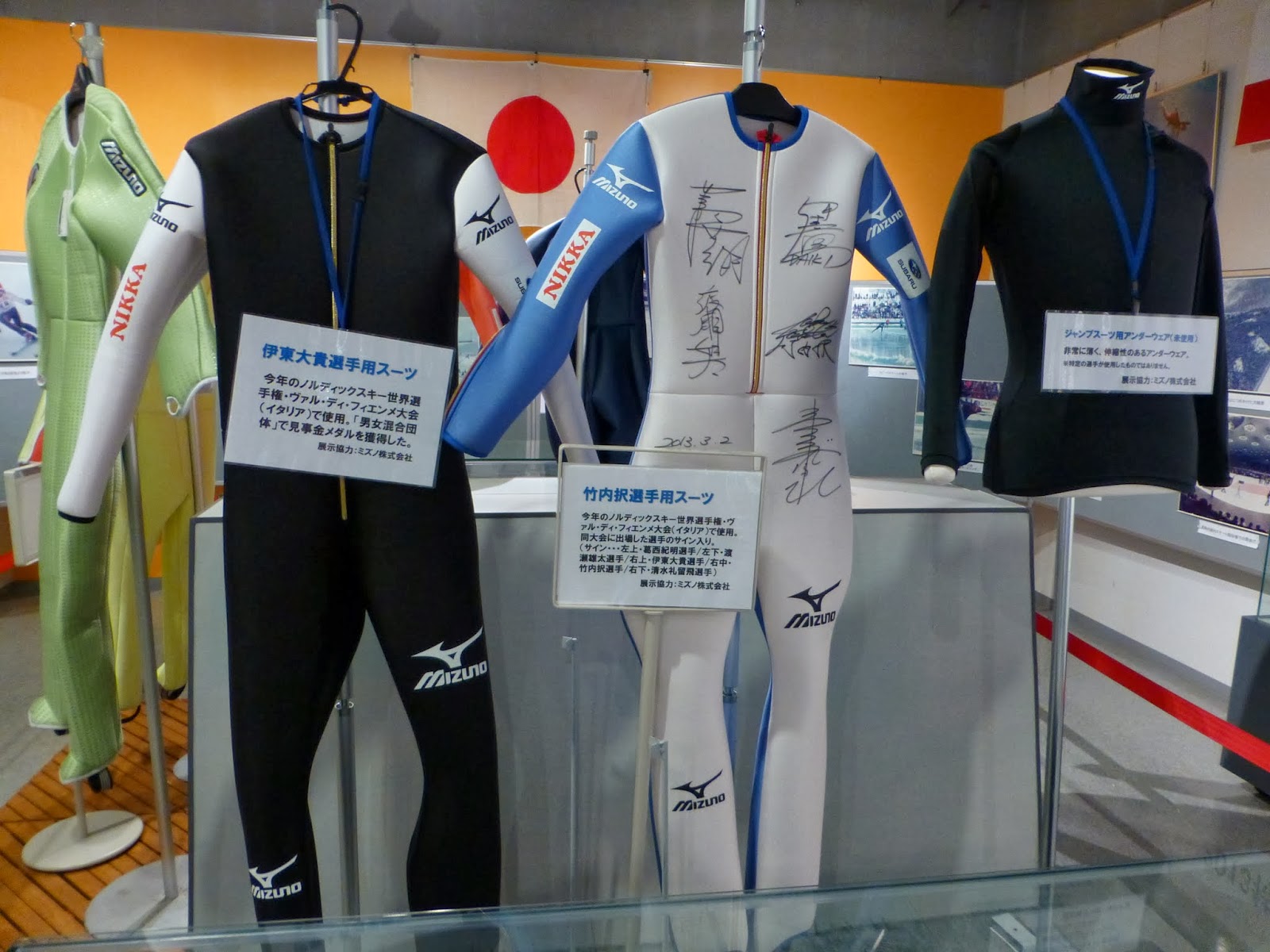 I'm not exactly sure what this display was, other than it must have been really good skiiers from Japan. 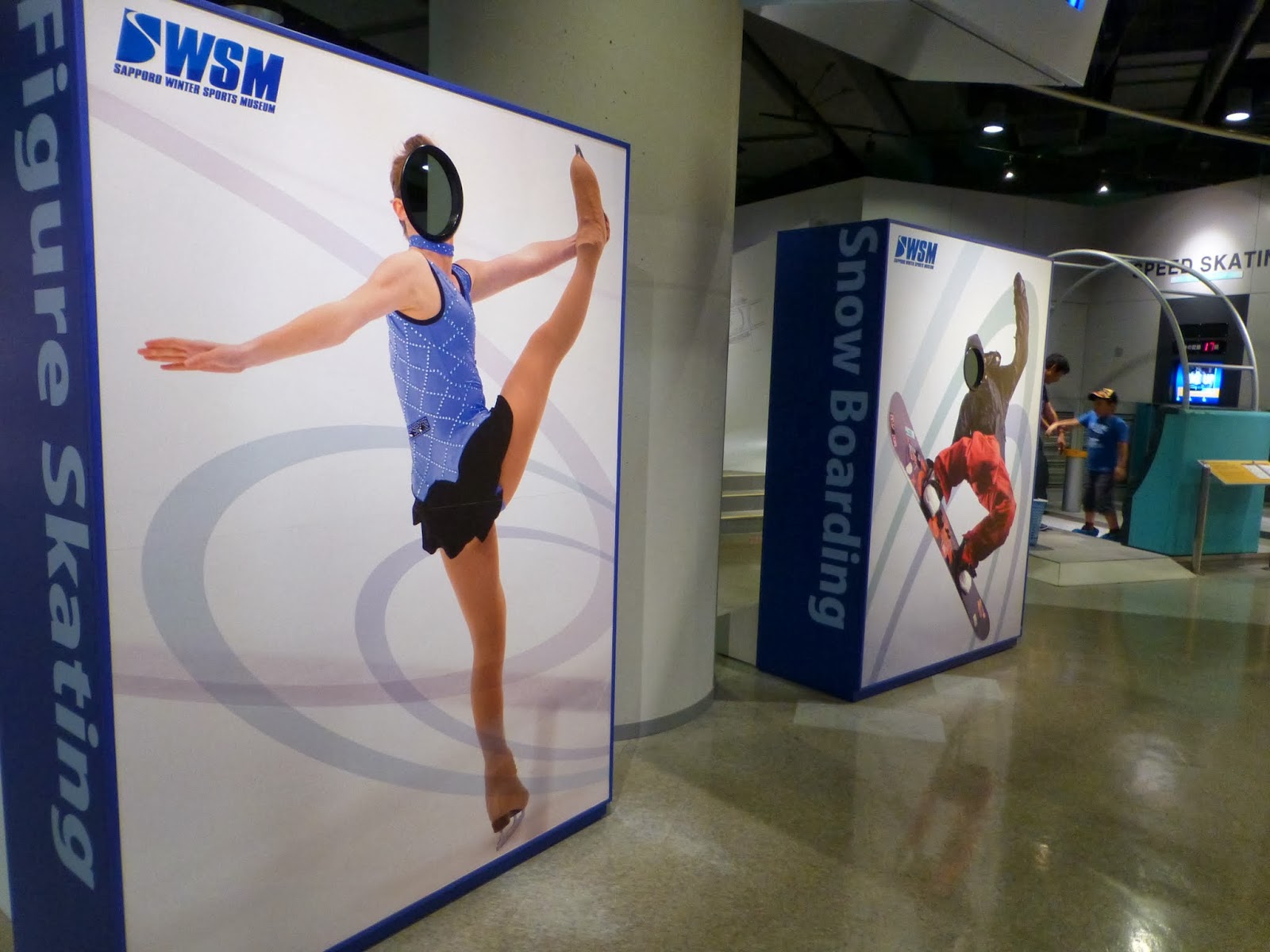 Would you like to be a figure skater or snow boarder? Just take your picture here. 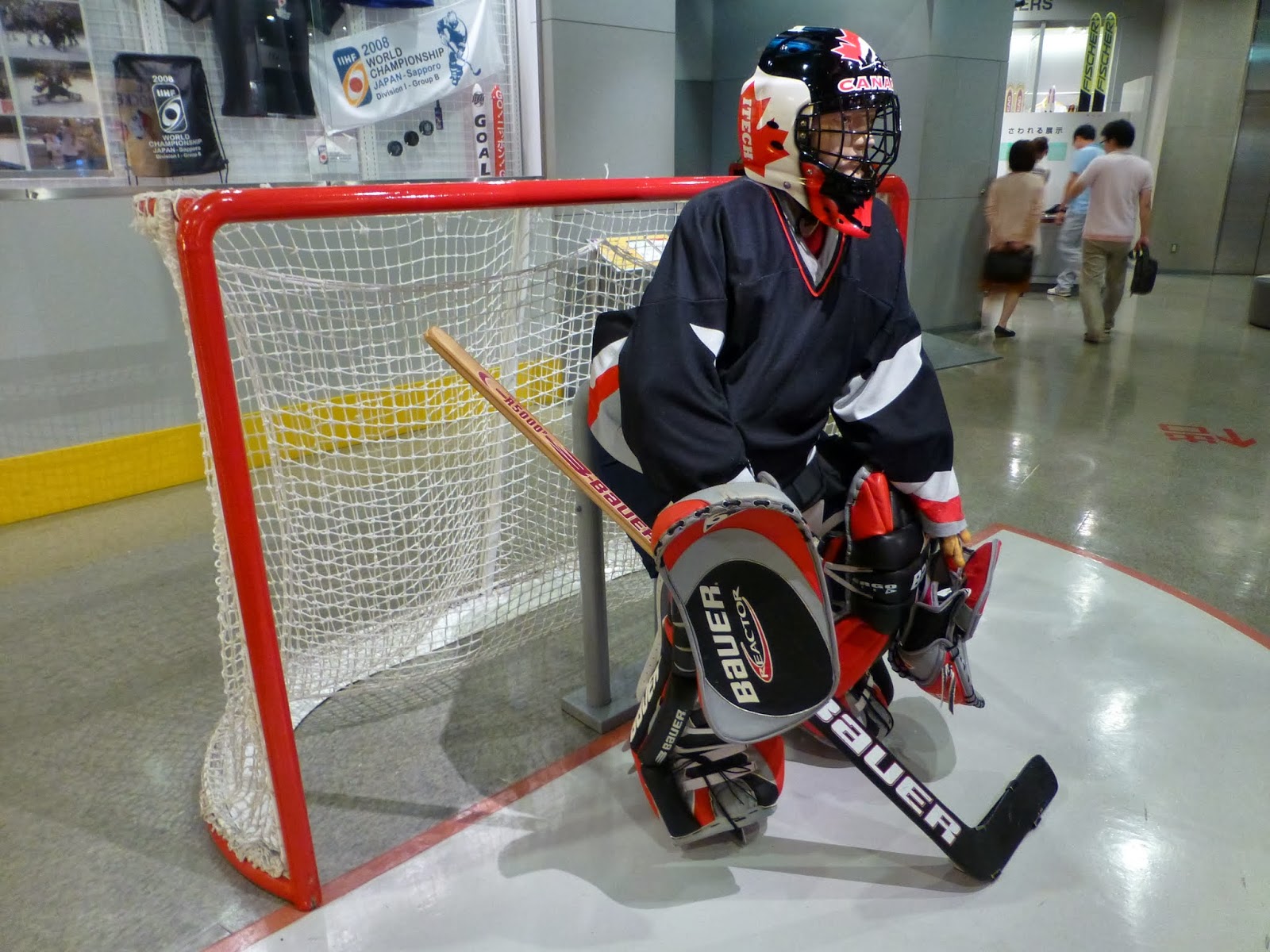 Photo opportunities are all over the place. Would you like to pose with an Olympic hockey goalie? 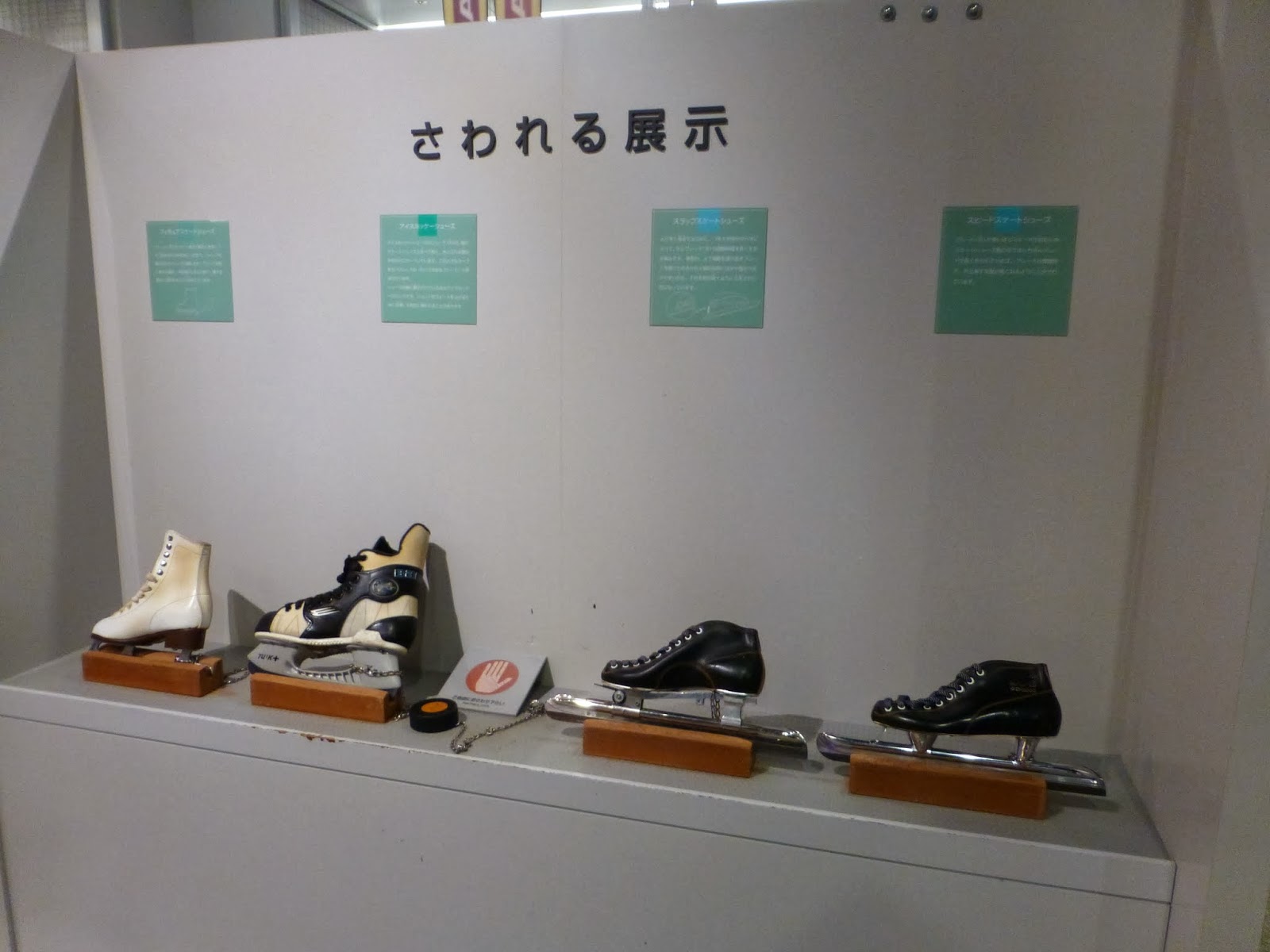 There are lots of little displays where you can touch and explore the equipment - skates, skiis, a hockey stick, etc. Again, a suggestion for the museum - due to the uniqueness of clothing used in the winter games, a dress-up area (you can try on costumes for samurai and geisha/meiko characters at other places) would be neat, though I don't know how that would work. Posing as the hockey goalie instead of with the hockey goalie would be even cooler. 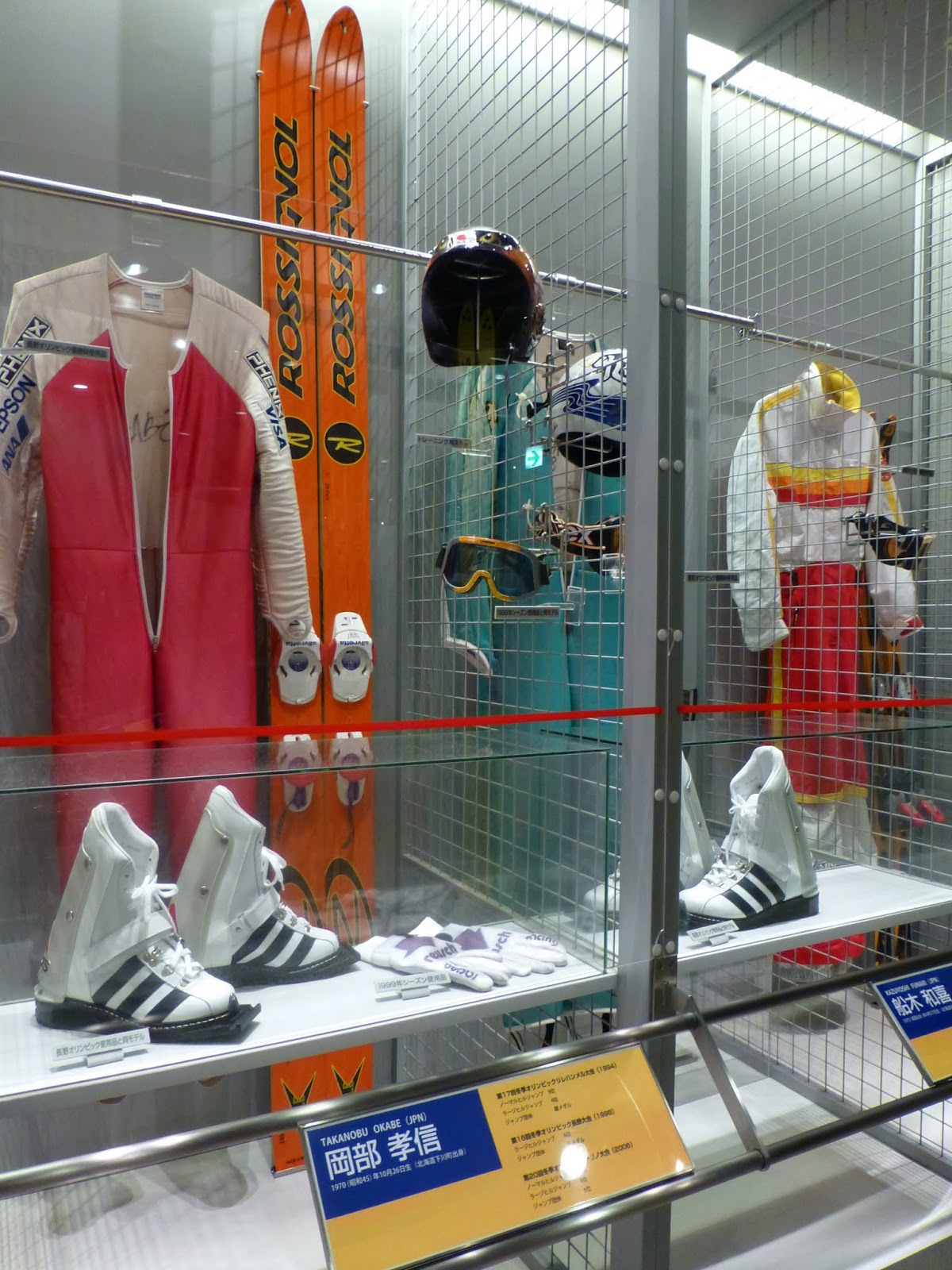 Off in the corner, you can see a series of lockers full of equipment from some of the better (best?) Japanese winter sports competitors. I'd assume that most, if not all of them have been to the Olympics, and, again, most, if not all, won at least one medal. (That's a lot of comma-filled clauses.) This is the Competition Information Zone, also on the first floor. 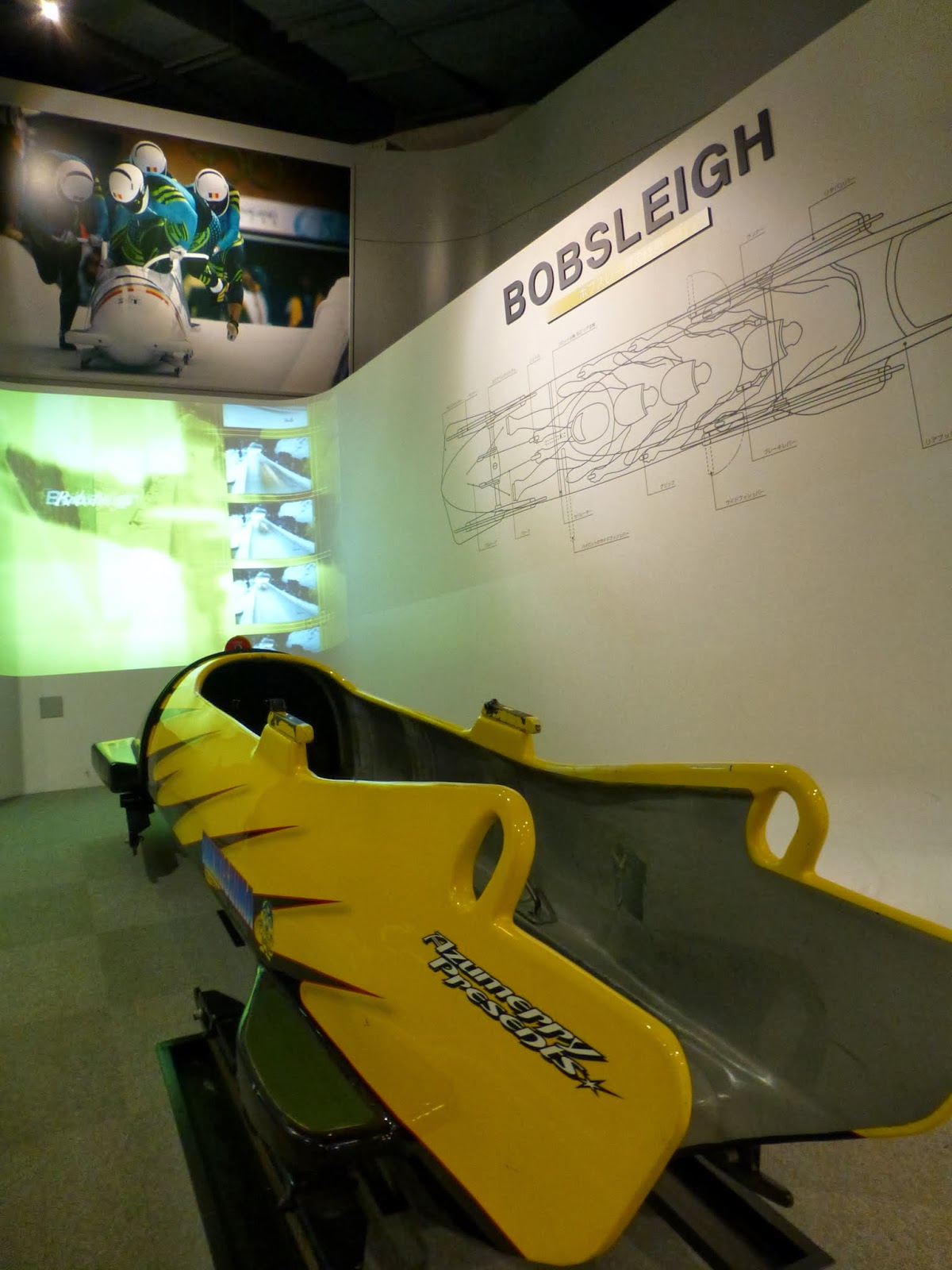 Bobsleigh! Cool Runnings was better. Just an example of the interactive "game" - you can sit in this bobsleigh and watch a (live action) movie from the point of view of the bobsleighers, but the sleigh doesn't move and you don't have any control. How much better would it be if you could control the sleigh and compete against others and yourself? All it would take is "controls" in the sleigh at the least (plus, of course, some form of video game instead of just a video), though it could become an entire motion-based unit.

While I have some criticisms of the museum, that's because it's so good and so close to being great. If you find yourself in Sapporo, and are a fan of Olympic games or the sports you can find in them, it's worth a visit. But it takes about 20 minutes to get to Okurayama, where the museum and jump is located; buses to/from Sapporo Station run every 30 minutes or so, and also go by the zoo. Just ask where to get the bus toward 大倉山 (Okurayama). Admission is 600 yen, and the museum is open from 9:30 AM until 5:30 PM (6:00 PM May through October; Fridays and Saturdays until 9:00 PM June through September).

You can also take the ski lift to the top, which gives a better view of the launch area and (on clear days) the ability to see Sapporo and its surrounding countryside. I didn't use the ski lift, because a typhoon was moving in so it was rainy all day and the view was nonexistent. The fee is 500 yen round trip, or 250 yen one way. I guess you can walk back down, because I'm not taking the ski jump.

There's a Mongolian barbecue restaurant at the stadium, open for lunch 11:30-2:30 and dinner 5:30-9:30. The lunch menu is much cheaper, although you get a smaller portion. A building near the museum building, called the Crystal House, sells lots of souvenirs including Okurayama "exclusives" and several Hokkaido gifts. The Mongolian restaurant is located on the second floor of this building. Also, there is a cafe in the museum building.