What that boring title means is that I am now on my way to Kyushu, where I'll be until sometime Sunday afternoon or evening. At which point I go back to Hiroshima for a day at Miyajima.

This was my first night bus trip, and trip it was. I was worried about timing but I had plenty of time to spare in Shinjuku. The bus ride was about 10 hours, including 15-20 minute rest stops every two hours. There were several other gaijin (foreigners) on the bus, and the two guys behind me kept their reading light on most of the night. Even after they fell asleep. Needless to say I didn't get much sleep Saturday night.

However, things were quite bright yesterday. Literally. It was a beautiful morning, and I got some great pictures. The focus yesterday morning was on the Atomic Bomb landmarks an museums. I started at the Dome, visited the Peace Park, and then radiated out from there, hitting a few of the buildings that were left standing after the bomb hit.

It was time for something a bit more cheerful in the afternoon. I attended my first Japanese baseball game, and it was a lot of fun. I believe the Hiroshima Toyo Carp's ace pitcher (Maeda) was on the mound and he threw eight innings of shutout ball. He took a no hitter into the seventh, though he walked a batter in the first. One of the foreign ball players hit a two run homer to seal the Swallows' fate as the home team won 3-0. As you may have read, Japanese fans are really into the cheering part of the game. They all have noisemakers to clap and sing with - and they have several different songs including a theme "fight" song. In the seventh inning, they sing a song and then release a bunch of balloons. At the end of the game, everyone stays and cheers as the game's heroes Are interviewed on the field. It's very interactive. I'll tell you more later (especially since I am going to another game this Sunday).

I was exhausted, thanks to a lack of sleep, the heat, and the movement from the morning, and almost fell asleep at the game. Maybe I did fall asleep for a minute. I was that tired. But I had to wait until after 9 to "check in" to the Internet cafe that would be my hotel, so I could stay until 9am (package prices are by the hour or groups of hours). So I went to Round 1, a chain o entertainment venues I wrote about before. For less than I couple thousand yen I sang karaoke, had all-you-could-drink sodas, and some chicken nuggets. (Chicken nuggets out here are made from real breasts and aren't processed. Maybe tenders is a better word? They're about the size of large nuggets though. And it was off to the I-net cafe for the night! Originally I was going to stay in a capsule hotel but I couldn't find the one I was looking for. It seems to have gone out of business very recently as I can't find any mention of its demise and it still exists on google street view. Sleeping in a net cafe has its ups and downs. It was relatively cheap and they had a shower and free drinks and Internet (of course). But the booth was a little too small to stretch out fully, and it was pretty warm in there. I went to WIP in Hiroshima, and I know different companies (and even different locations) have slightly different setups. Tonight I'll be in a Manboo in Kokura (KitaKyushu) and I'm hoping it's similar to the Omiya location I am familiar with.

Anyway, I got enough sleep, even of it wasn't perfect. This morning: rain. I was determined, though, so I was off to a garden set around a lake, followed by Hiroshima Castle and a temple. All were very nice, but then I hit the tracks and traveled to Iwakuna. Iwakuna is home to a very famous bridge and a castle. They also are supposedly known for their sushi, which looked like giant bloke of layered rice and fish. I passed on that. The rain finally stopped in the late afternoon and the sun tried to come out, but it never found a hole. At least tomorrow should be nice! I'm going to back to back amusement parks the next two days. There is a threat of rain but I am really hoping it doesn't ruin the trip! Fingers crossed.

So here I am on my local train to Kokura. I missed the 5:45pm train so I had to wait for the 6:49. I'll be in Kokura in about three hours and it's off to bed! I'm attaching some pictures from the trip; more to follow eventually. 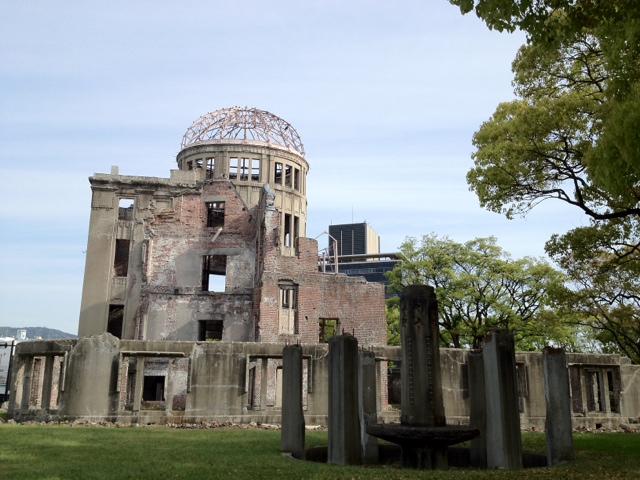 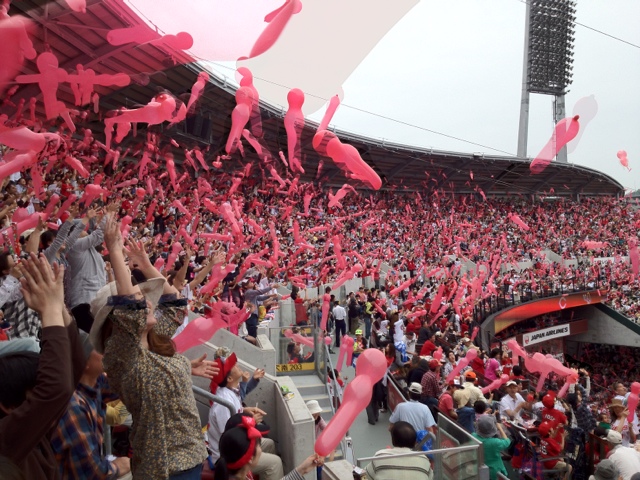 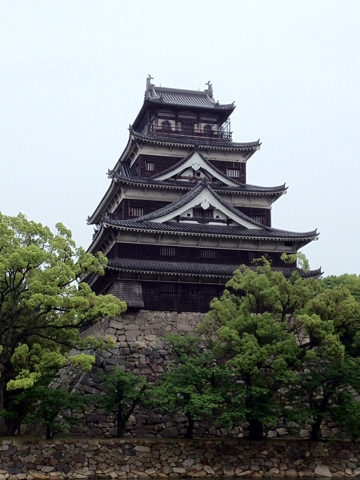 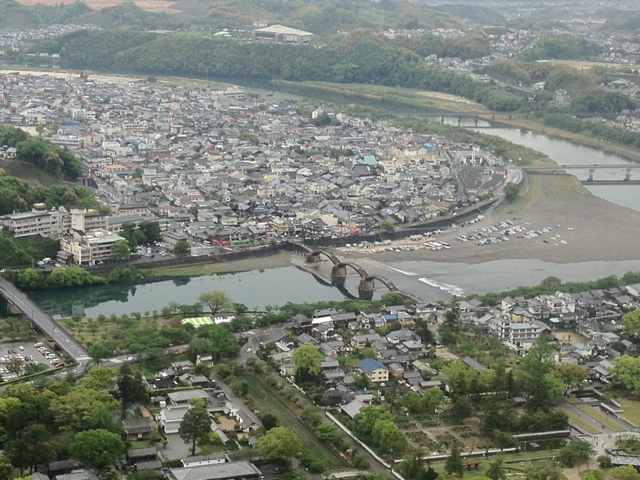 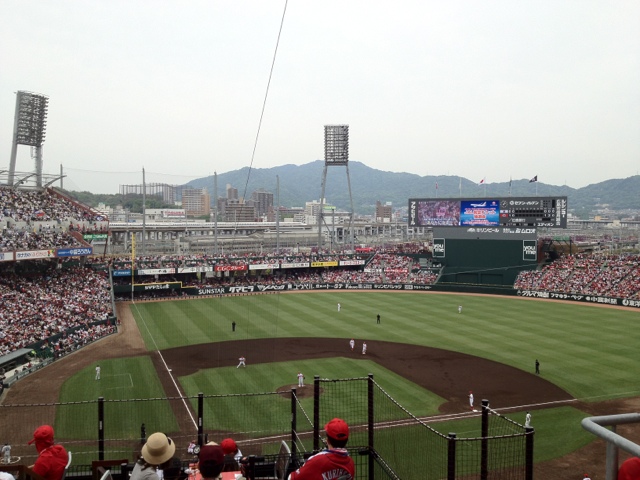 A Week of Gold

As most of you know, I was sick a couple weeks ago. The cold turned into a bad cough, caused by sinus congestion. Perhaps a sinus infection. I'm doing much better now though I still cough occasionally.

But that hasn't stopped me from trying to enjoy myself a bit. I had a great night with Akiko at Round1, an indoor sports center with batting cages, small basketball courts, roller blading, tennis, volleyball, video games, billiards, and karaoke. All these are included in the entry price (different Round1 centers appear to have different sports stuff). Anyway, we got there just after 11pm, so there was an all night set price. Sure, we stayed only a few hours but that place was a lot of fun, especially with Akiko!

Last weekend, I had some training on Monday, and Sunday was a miserable, rainy day, but I met up with Kenny to talk and look at baseball cards. I'll talk about that on my other blog. He presented me with a gift brought back from America: a big bag of Funyuns! I haven't opened them yet. I'm waiting until I get back.

Back from where, you ask? I'm leaving tomorrow night for Hiroshima and Kyushu, and I'll be gone all week during the Golden Week holidays. Since I expect to have time, I should bring you some updates every night. I say that now, knowing that probably won't happen! But I'll sure try.

My last post was April 3, and here it is more than two weeks later. I haven't forgotten about you all! I've been sick. Last week was a cold, and this week is something else - lots of congestion, which is causing me to cough, which in turn is causing headaches, throat pain and neck aches. Needless to say, I have no interest in writing when I get home from work. 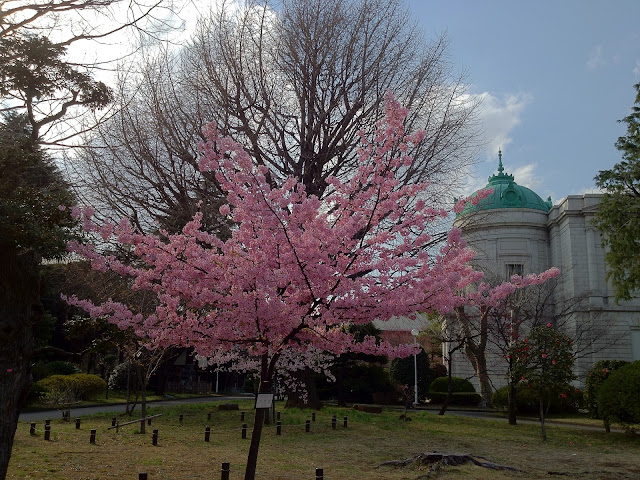 Speaking of work, I have a vacation coming up! April 29th is when my Golden Week vacation starts, and I'll be in Hiroshima and Kyushu taking in all the sites down that way. I plan on visiting two amusement parks, catching two Japanese baseball games (the Hiroshima Carp and Fukuoka SoftBank Hawks), trying my first onsen (spa), and more. Oddly enough, I'll be visiting both cities which have had nuclear bombs dropped on them (Hiroshima and Nagasaki), which means I'll be visiting their memorials as well.

This whole month has been pretty busy! I finally made it to Fuji-Q to ride Japan's best coasters, I visited Ueno Park a couple times, did some cherry blossom viewing, worked one Sunday, and will be going to some follow-up training this weekend.

I'm going to try to get back into the swing of things with posting. Hopefully I'm on the back end of this congestion/sinus infection type of thing and won't have a miserable weekend. It's supposed to rain on Sunday (my day off) which might put a dagger in my plans. No, really. Dagger. If it rains, I'm going to cancel my plans to go to a BayStars baseball game. I'm not really sure what I'll do if there's bad weather on Sunday. But I can figure that out when I get to the weekend!

Email ThisBlogThis!Share to TwitterShare to FacebookShare to Pinterest
Labels: Life

Oishii-so: Fried Chicken for your backpack!


I'm a bit sick with a cold. It's wreaking havoc on my sinuses, mainly. I think I might be on the far side of a 48-hour flu or cold (I felt worse this morning than I do now) but I'm trying to take it easy. Not the simplest thing to do when life keeps going on: laundry and chores had to get done yesterday, and work goes on regardless of how I feel.

I'm cooking more, now. I need to tell you all about that. But for tonight, here's a snack I picked up from the kid's store in Shin-Misato. 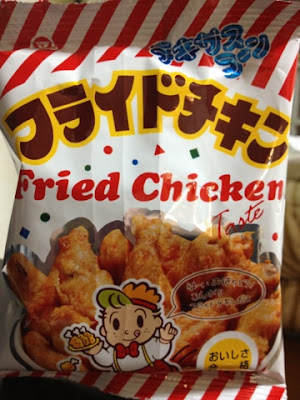 The English on the front of the bag says "Fried Chicken Taste" and has pictures of real pieces of fried chicken. The back is a little more telling, that these are Texas Corn brand corn puffs (just like Cheetos balls but with different flavoring). 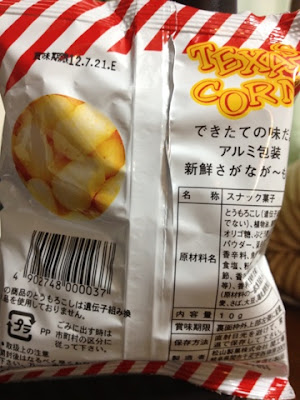 Opening the bag (see photos below) they don't have much color. I can't smell too well right now but they do smell a bit like chicken. And there's no mistaking the taste. 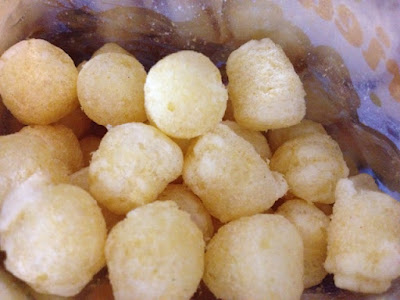 The flavor is not unlike that of fried chicken skin. There's a hint of oil flavor, maybe some light spices. The aftertaste reminds me of chicken meat. It's quite amazing when you think about it, how well the flavor matches that of actual fried chicken (if a bit unseasoned).

They aren't as good as the shrimp flavored chips (I've been thinking of getting another bag of those, when I run out of snacks). But they aren't bad. I won't buy them again, because there are other things I enjoy more in the snack category. I'll eat them again if they turn up at a party, though.