Spring training is getting underway in the US and Japan, so now is a good time to talk about the last game I saw last year. It wasn't an NPB game, though - I headed to a not-too-small stadium in Kanagawa prefecture to see the Japanese Women's Baseball League play another double header. This was my second visit. You can read about my first trip here. 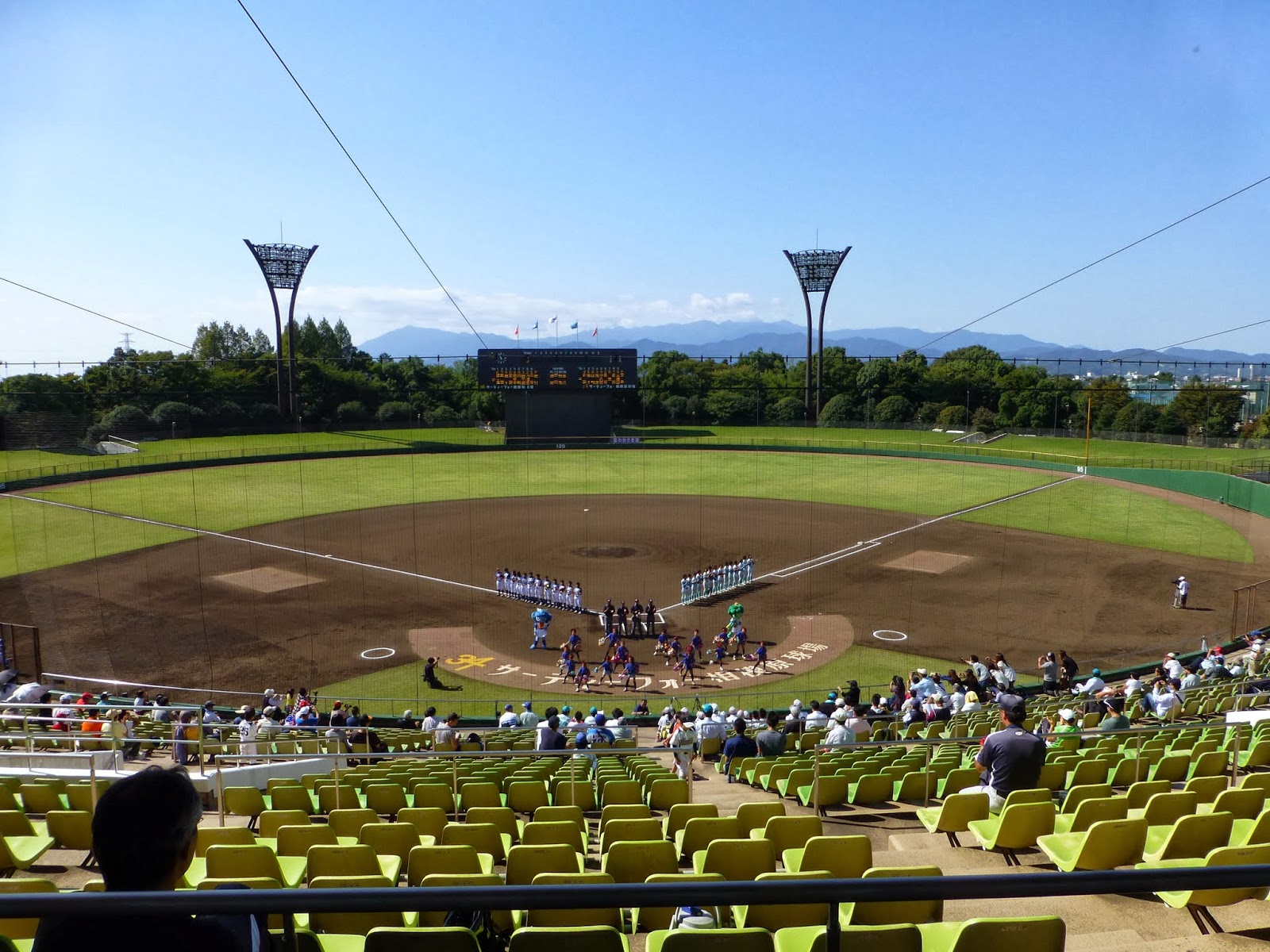 Before the game, the teams lined up along the foul lines. The stands were never really full, but the photos are a little deceiving, because there is a small overhang behind the plate and several families and groups were sitting in the limited shade. 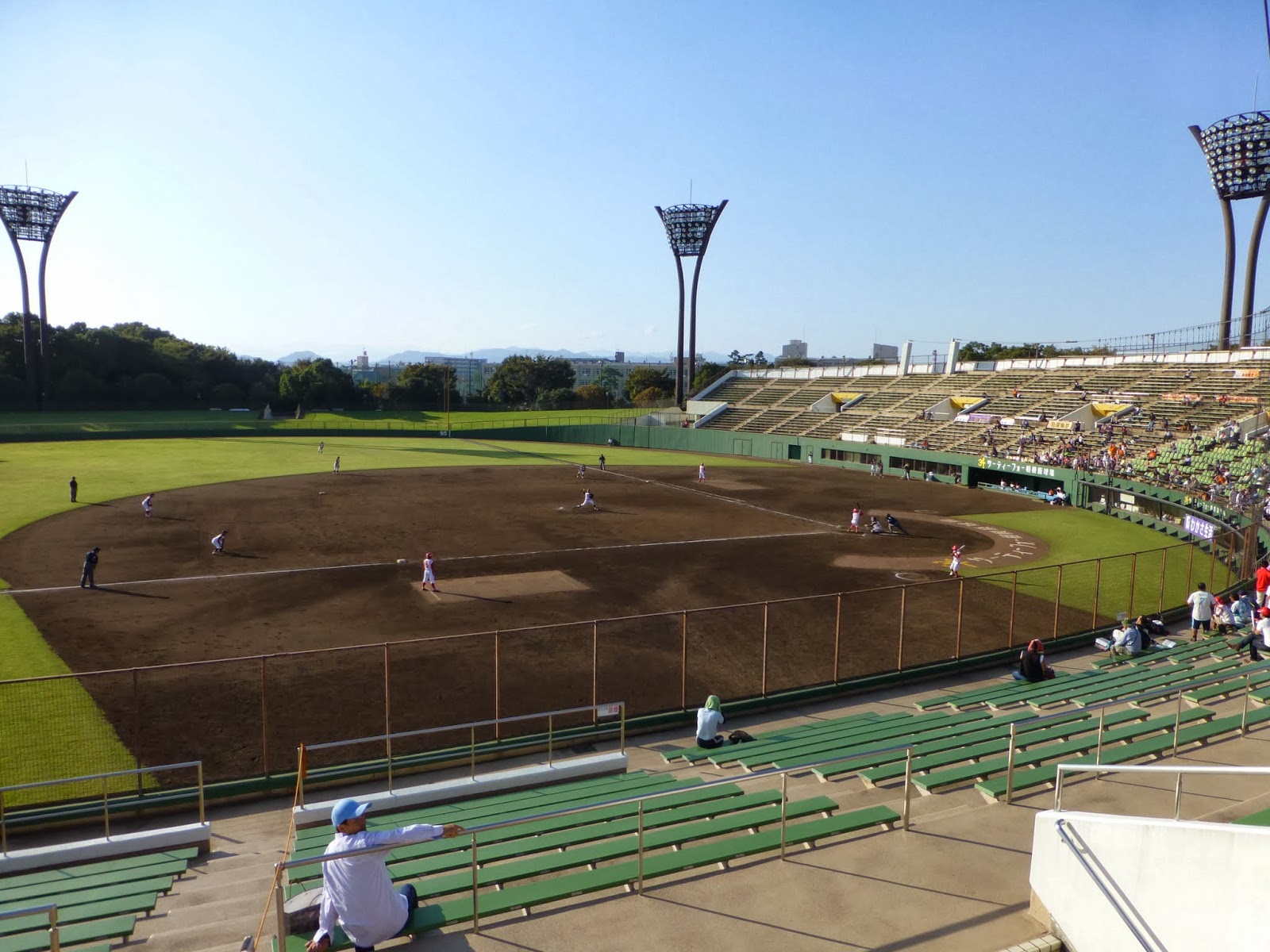 Japan's baseball fields are really uninspired. But this one does have a nice grassy area down the foul lines. The JWBL ropes off most of the stadium to keep the crowds and any messes in a controlled area. 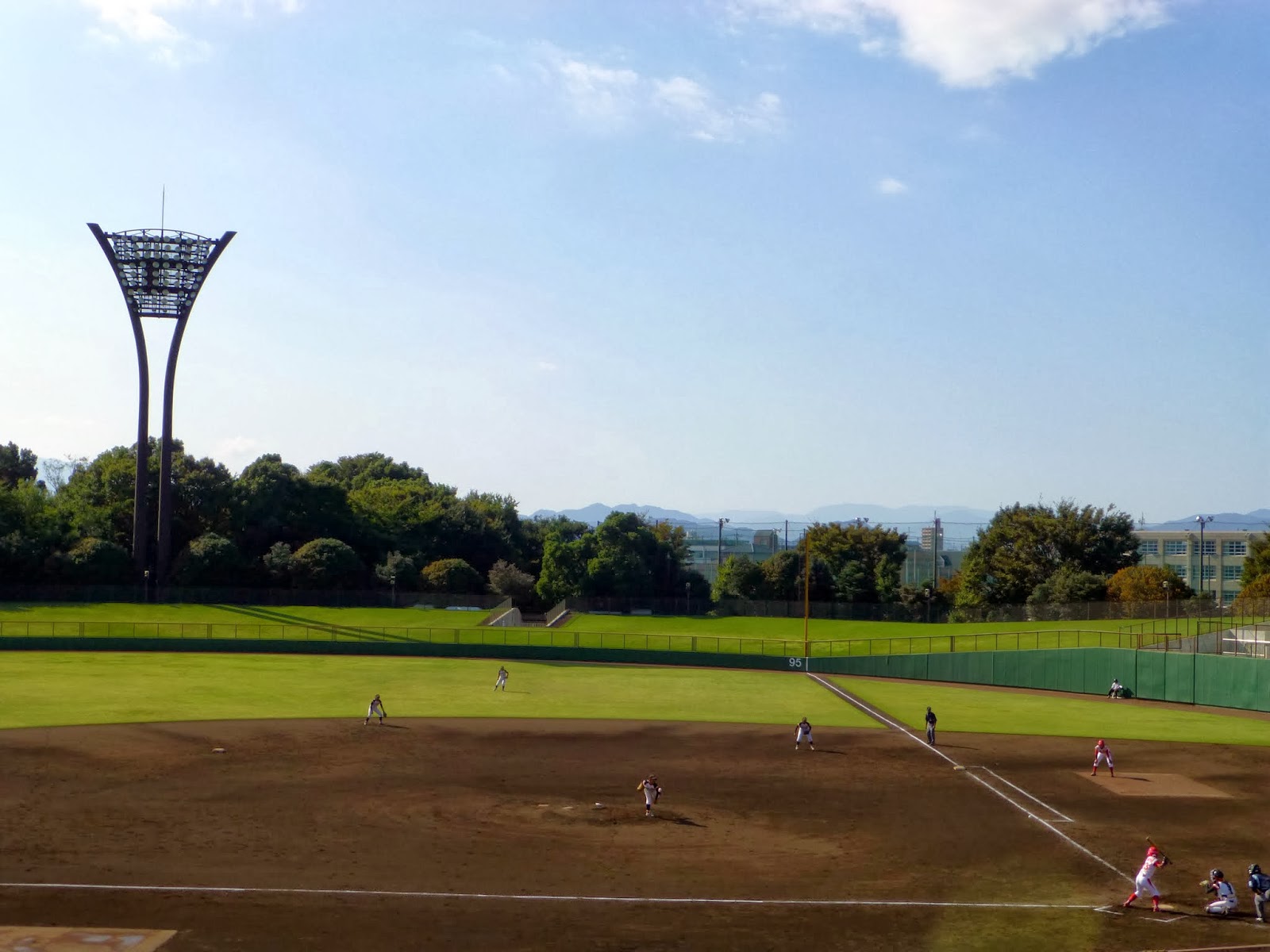 It's a shame that the outfield wasn't open, because it looked very inviting. Spend the day watching baseball and enjoying a picnic! Then again, with such a low attendance, nobody would probably go out there. 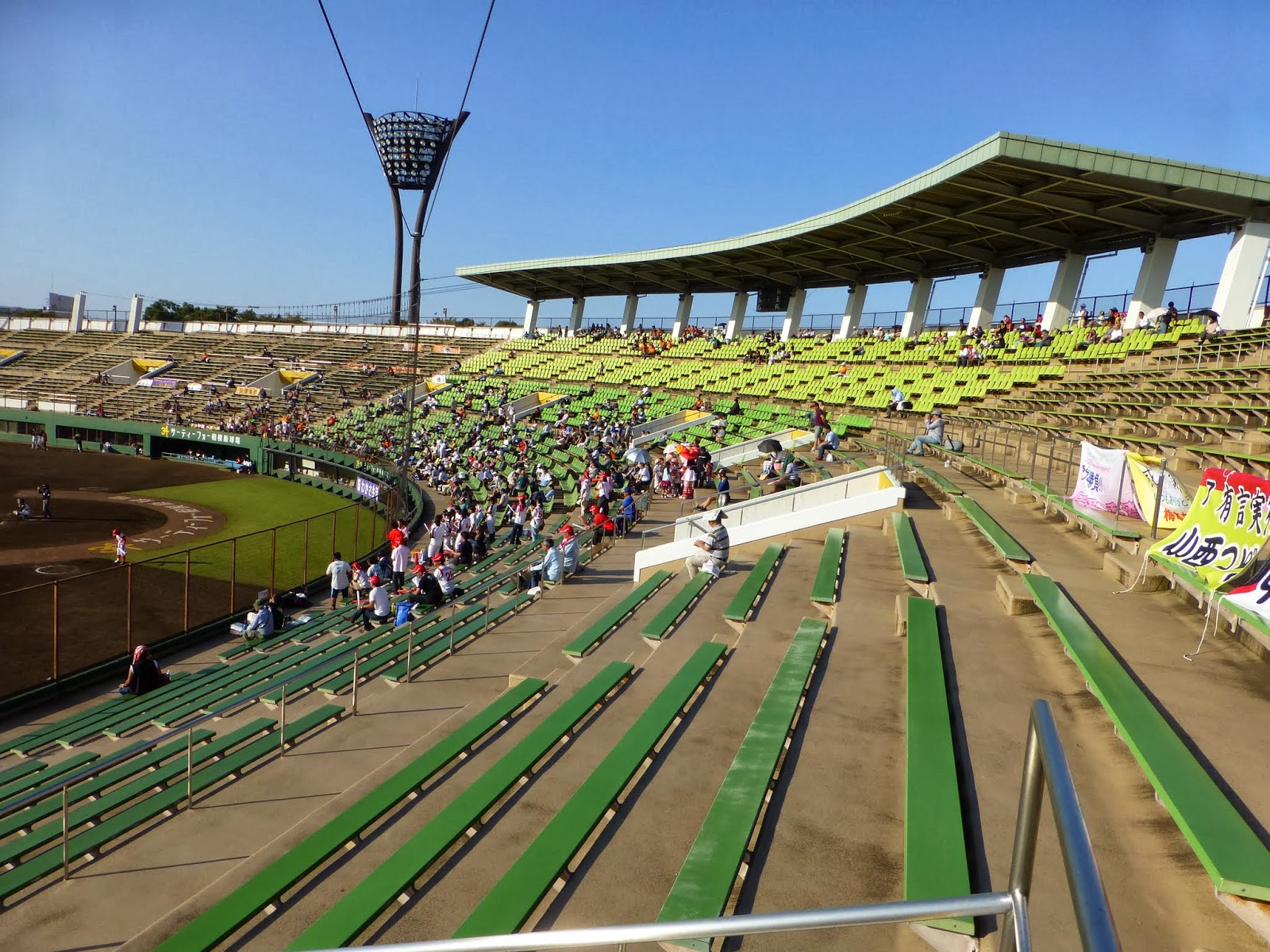 Here's a view of the seats behind the plate. Notice the cluster between the dugouts and behind the plate, the section of empty seats, and then the people sitting near the top. 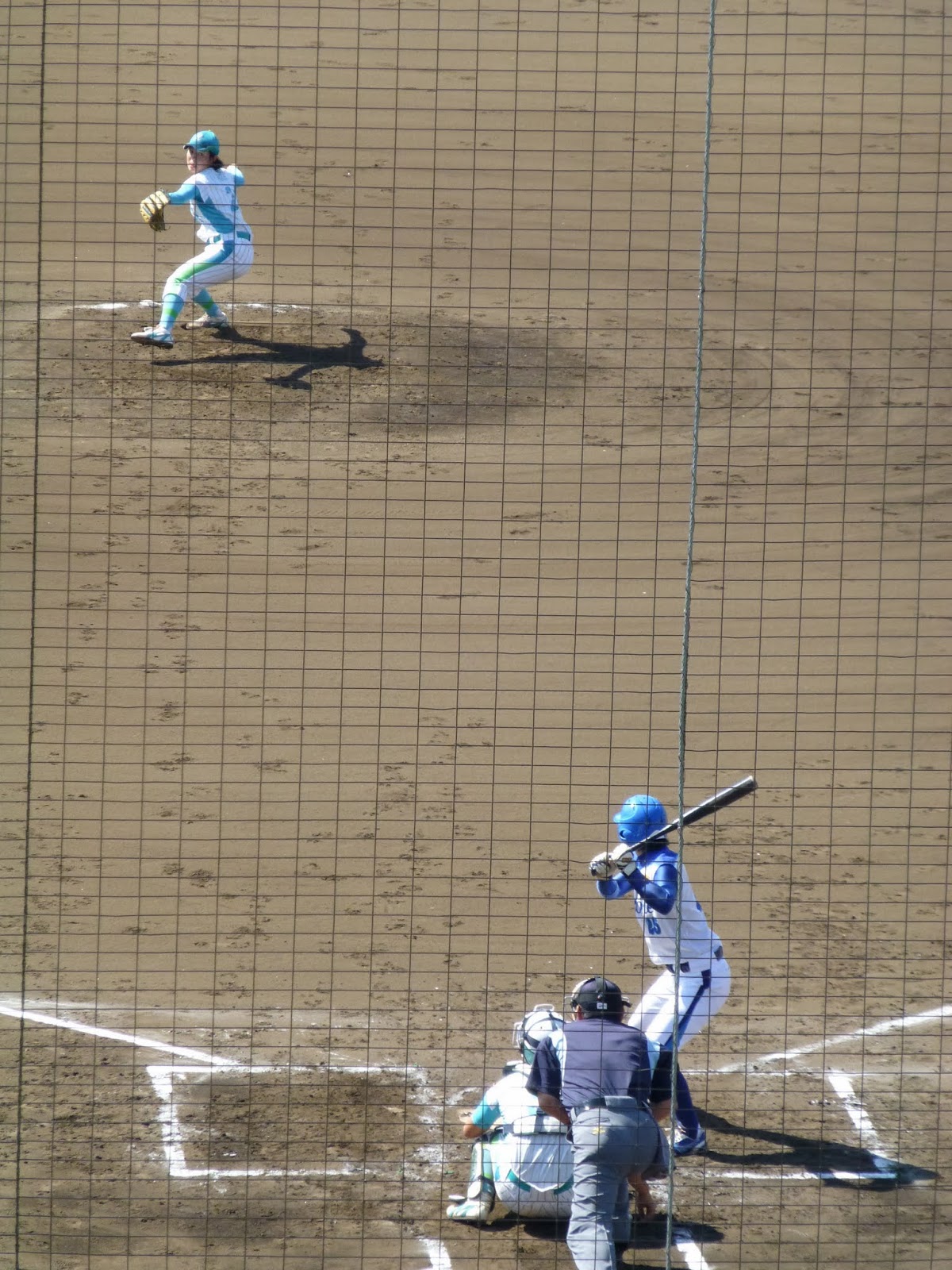 With two day games, I spent some of my time trying game shots without getting too in the way of the other spectators. First, a through-the-net shot from my chosen seat for the first game. 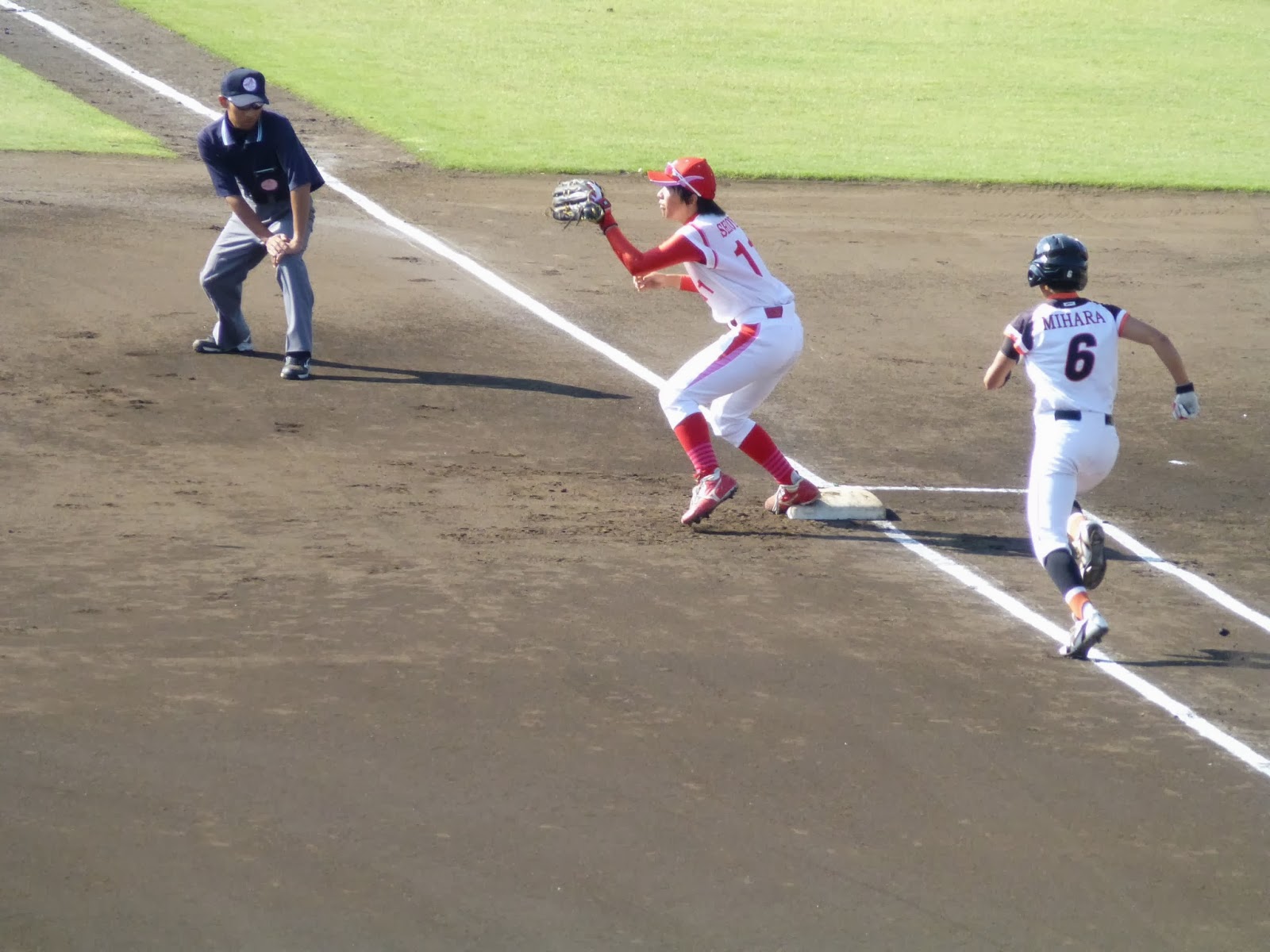 I moved to a different location for the second game. This shot was almost exciting. 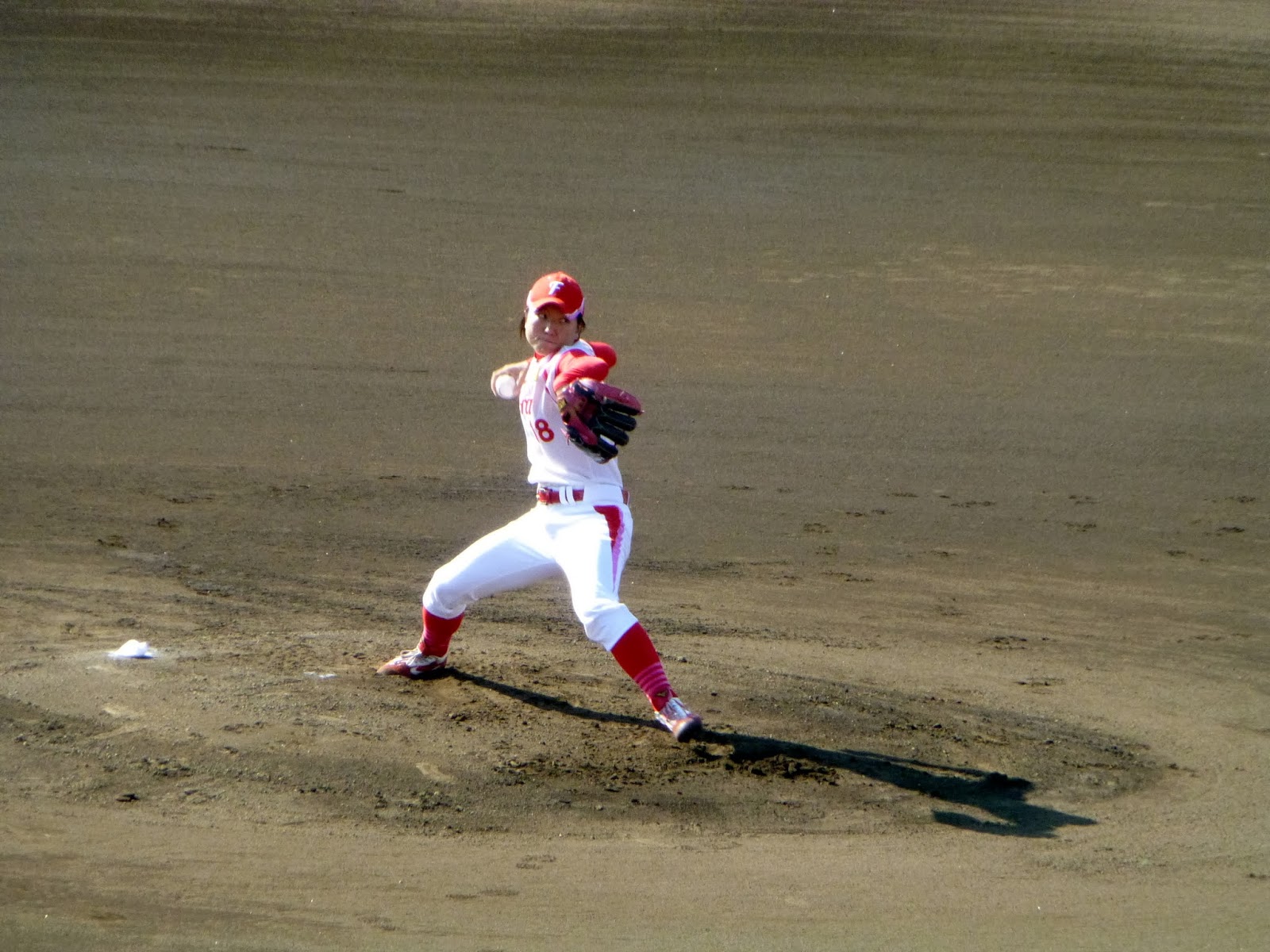 I could have probably cropped this photo a bit. But the mound without a grass infield looks so lonely I left it in there. 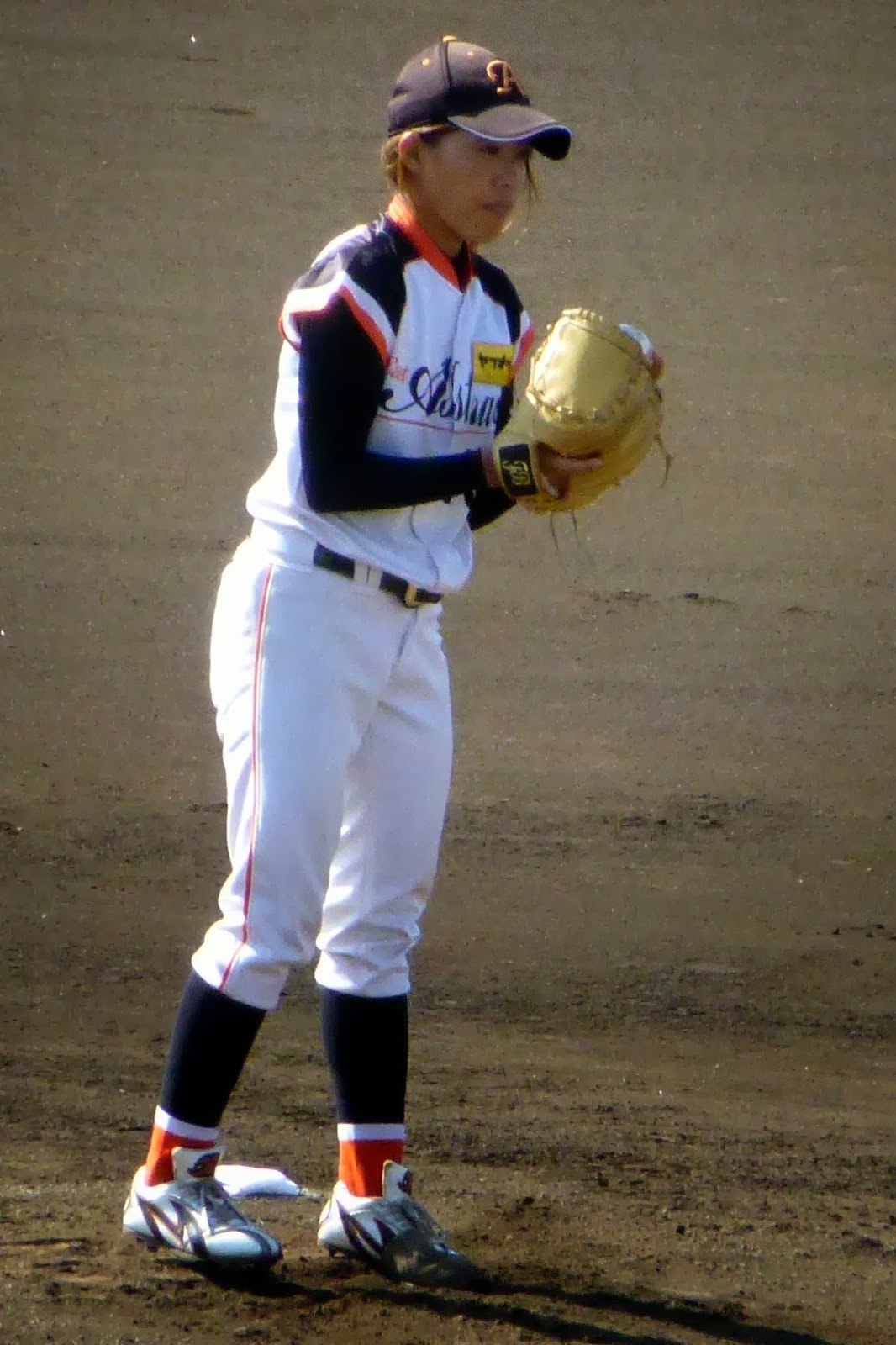 This photo looks a little grainy. I think I processed it a bit too much. 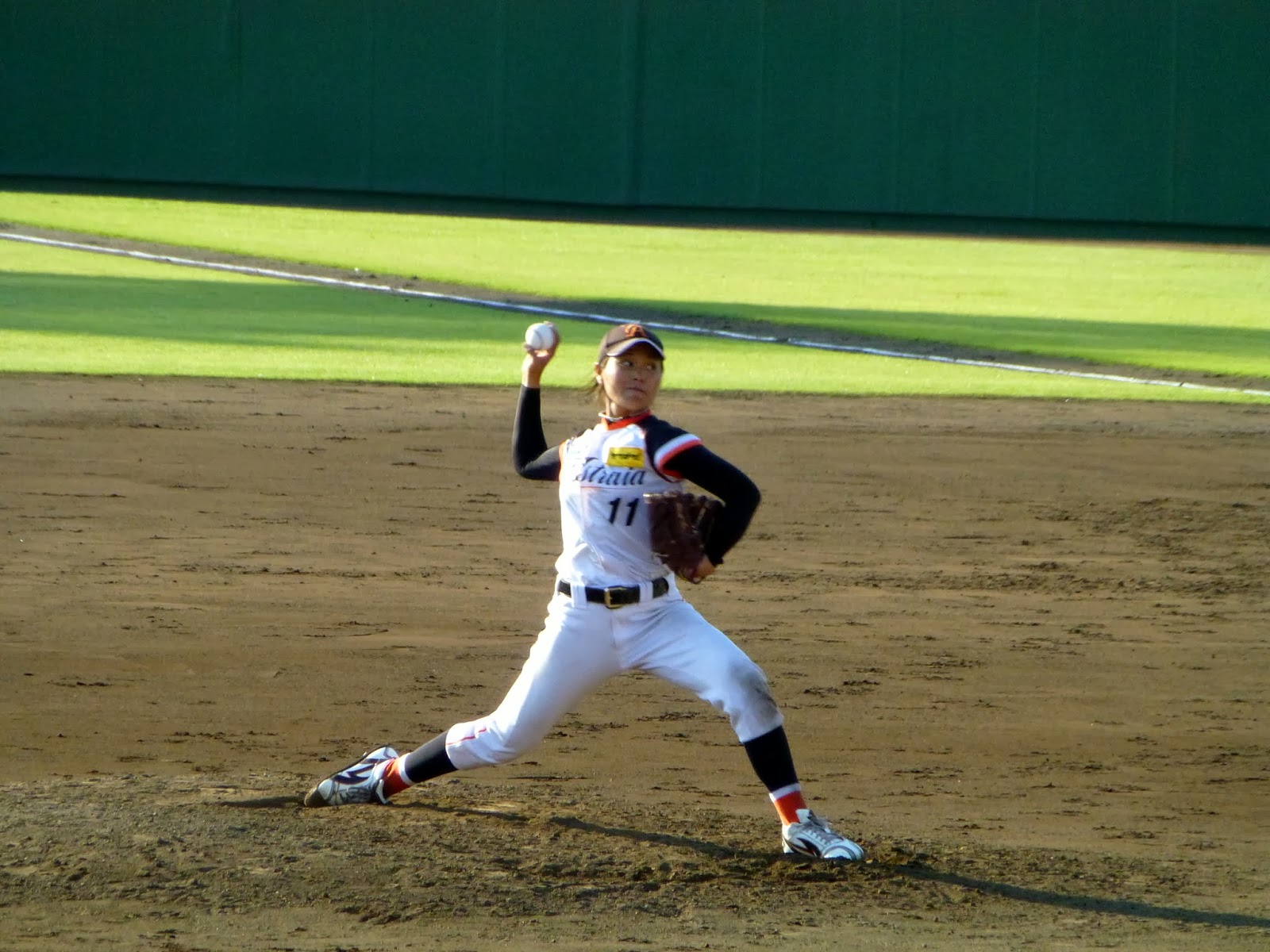 I think some of the graininess came from the ISO the camera was using. I played around a bit with my camera to test different shutter speeds and ISOs. 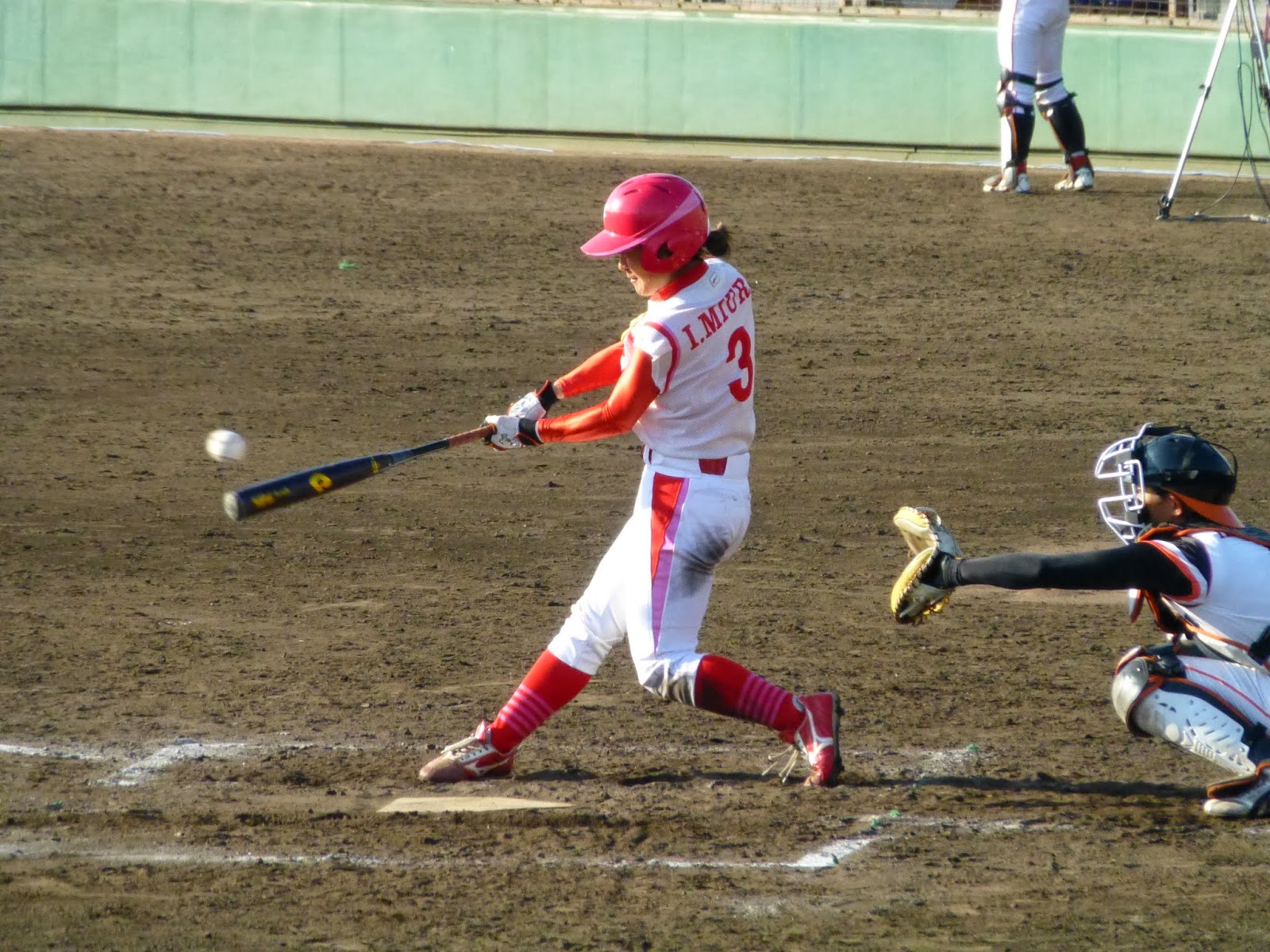 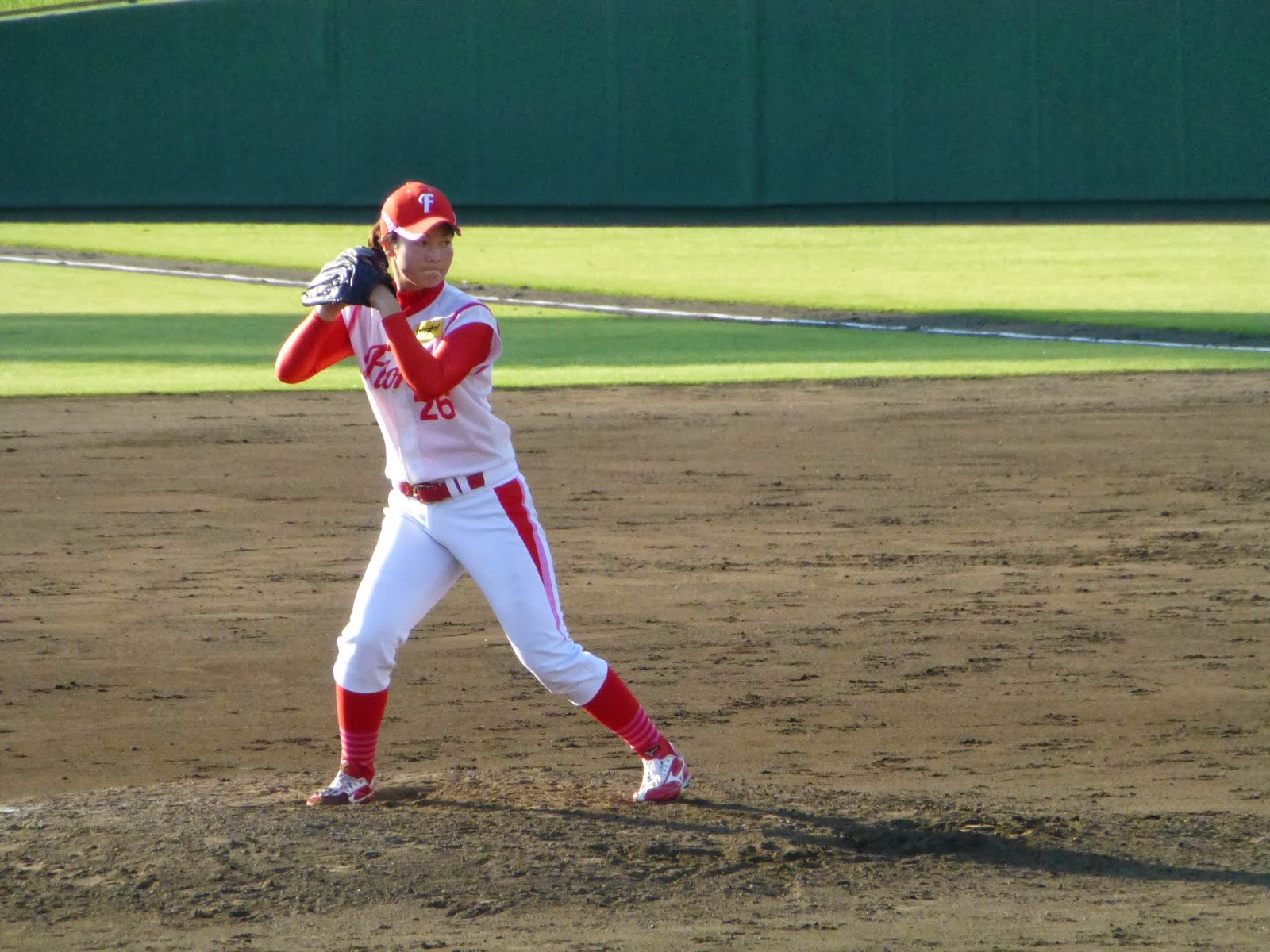 I'm disappointed that I didn't get to go to more than two events last year for the JWBL. They haven't published a schedule for 2014 yet, though the website (Japanese only) seems to indicate that there will be events on April 11th and 18th, but I can't tell where yet. But, then, those are Fridays so I won't be able to attend. They do several events over the year and I'm sure they'll announce a bigger schedule later on!
Posted by Ryan G at 2/21/2014 03:00:00 AM