My First Kobe Beef - from Lotteria?!

When you hear the name Kobe Beef, you probably think of an expensive steak made from highly-pampered cows. And that's about right. But just like any other cow, Kobe cows provide several different cuts and styles of meats. Fast food chain Lotteria has bought up a bit of the ground stuff to make a limited-time offering of burgers which use Kobe beef! 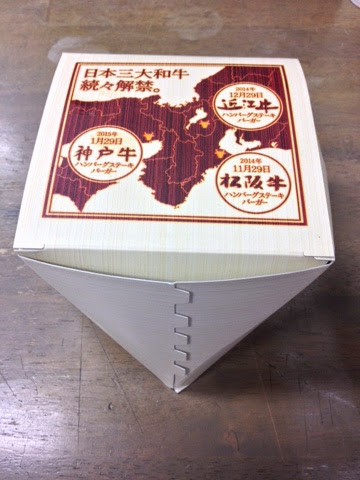 The box itself is pretty cool. Lotteria is using a bunch of local varieties of beef for sandwiches this year; the promotion began in November. There are a few months where there will be no special offer, as far as I can understand. 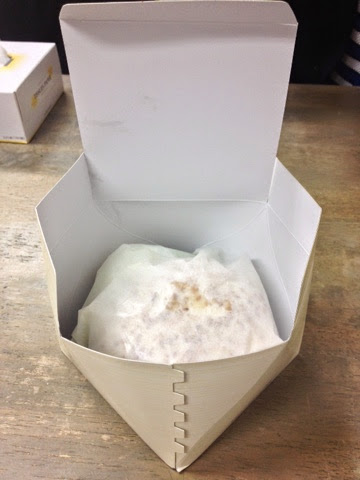 Opening the box, there's a package-in-a-package kind of deal going on. As my coworker said, "Welcome to Japan." In all, the burger was protected by four layers: a plastic bag, a paper bag holding the box and my fries, and the wrapper you see above. So I finally unwrapped it and got to the sandwich: 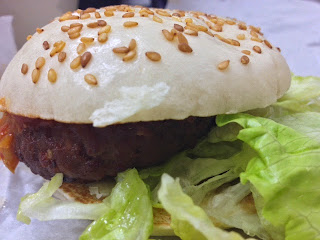 There's the burger! It looks like a small piece of meat, but it was hard to get a good shot (it's sliding off the bun a bit). This isn't a big sandwich, but it was larger than I expected.

As you can see, the bun itself isn't the usual brown; it's made from rice flour which is softer and a little chewier, and topped with sesame seeds. They also included too much of the usual boring lettuce, and a special sauce made from apples, bouillon, and local onions. While the review I read mentioned that the bun absorbed their sauce, my burger had plenty of it left behind, making the sandwich messy and a good bit slippery. The meat itself has chopped onions and a larger grain of ground beef, adding a lot of texture.

How does it taste? Pretty good! Most of the lettuce ended up falling onto the wrapper, so I was able to enjoy the flavor of the meat and sauce. The burger was moist and tender, and the larger pieces of beef made this sandwich stand out above any usual patty. I've certainly never had a burger with a flavor like this, and for my first taste of Kobe beef, I have to say it was pretty good.

However, this quality comes at a price, to the tune of 1500 yen for a (fast food) burger with a medium drink. There are burger joints in town with higher-priced sandwiches, but those are real, big burgers. As a novelty and to try Kobe beef, this was worth the cost. You won't see me shelling out that kind of coin again, though.

And, if nothing else, eating this during my lunch at work made for an interesting event. Everybody gathered around me to see the sandwich and watch my reaction! When was the last time you heard of a fast food burger attracting a crowd?
Posted by Ryan G at 1/31/2015 04:27:00 AM No comments:

My New Years Gift of Sweets

I spent my vacation over New Years traveling around Central Japan and the Kansai region. New Year's Eve was in Kyoto, and in addition to a little sightseeing a picked up a few traditional things.

My gift for the office was a box of yatsuhashi, which most likely Kyoto's most iconic food. It's a lightly sweet snack that is essentially a souvenir sweet these days. It comes in two forms and several flavors.

The baked version is mostly found in curved long triangles, similar to a stick of gum curved into a long semi-circle.

In its raw form, it's a soft, flexible dough. Many prefer the raw, unbaked yatsuhashi, which is usually cut into squares about 4" in size and folded into a triangle with a small bit of red bean paste filling inside.

The "basic" flavor is cinnamon, and unlike most snacks in Japan, the cinnamon can be quite pronounced. But baked yatsuhashi is also found in matcha (green tea), and raw yatsuhashi is found in at least half a dozen non-traditional flavors, like strawberry, chocolate, and yuzu (a sweet lemon-like fruit). Chocolate might be my favorite, although the other flavors are pretty good too, and the traditional cinnamon is certainly good as well! 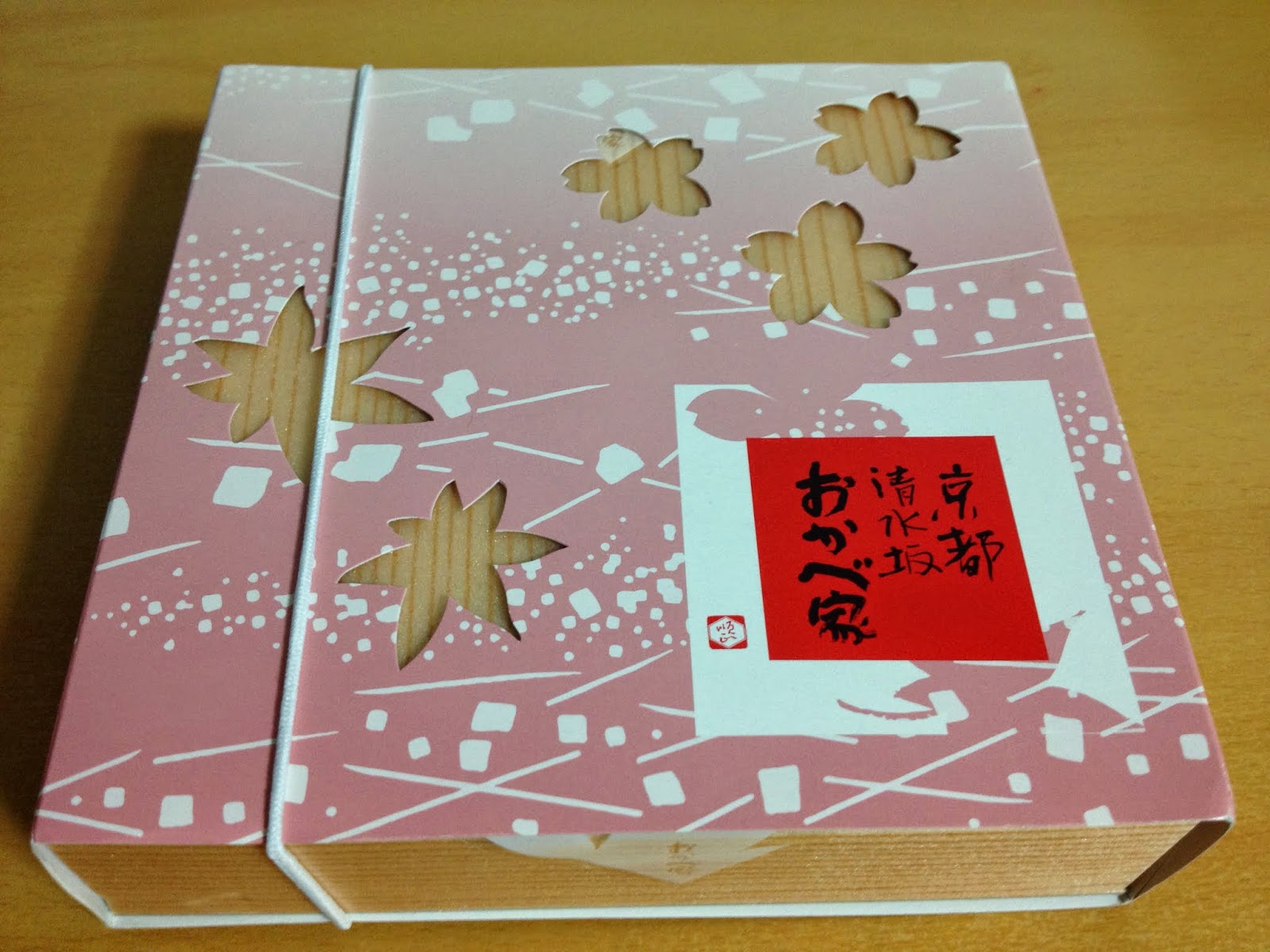 A gift to myself (as a sampler for the blog, naturally!) was the box you see above. The shopping street leading to Kiyomizu-dera Temple in Kyoto is full of, well, shops, mostly selling souvenirs and traditional goods. After picking up some yatsuhashi, I wandered into a different store that had a shelf of small jellies and some boxes to pack them in. I grabbed a nine-pack box (there are larger sizes, too) and picked out a selection of gorgeous sweets. 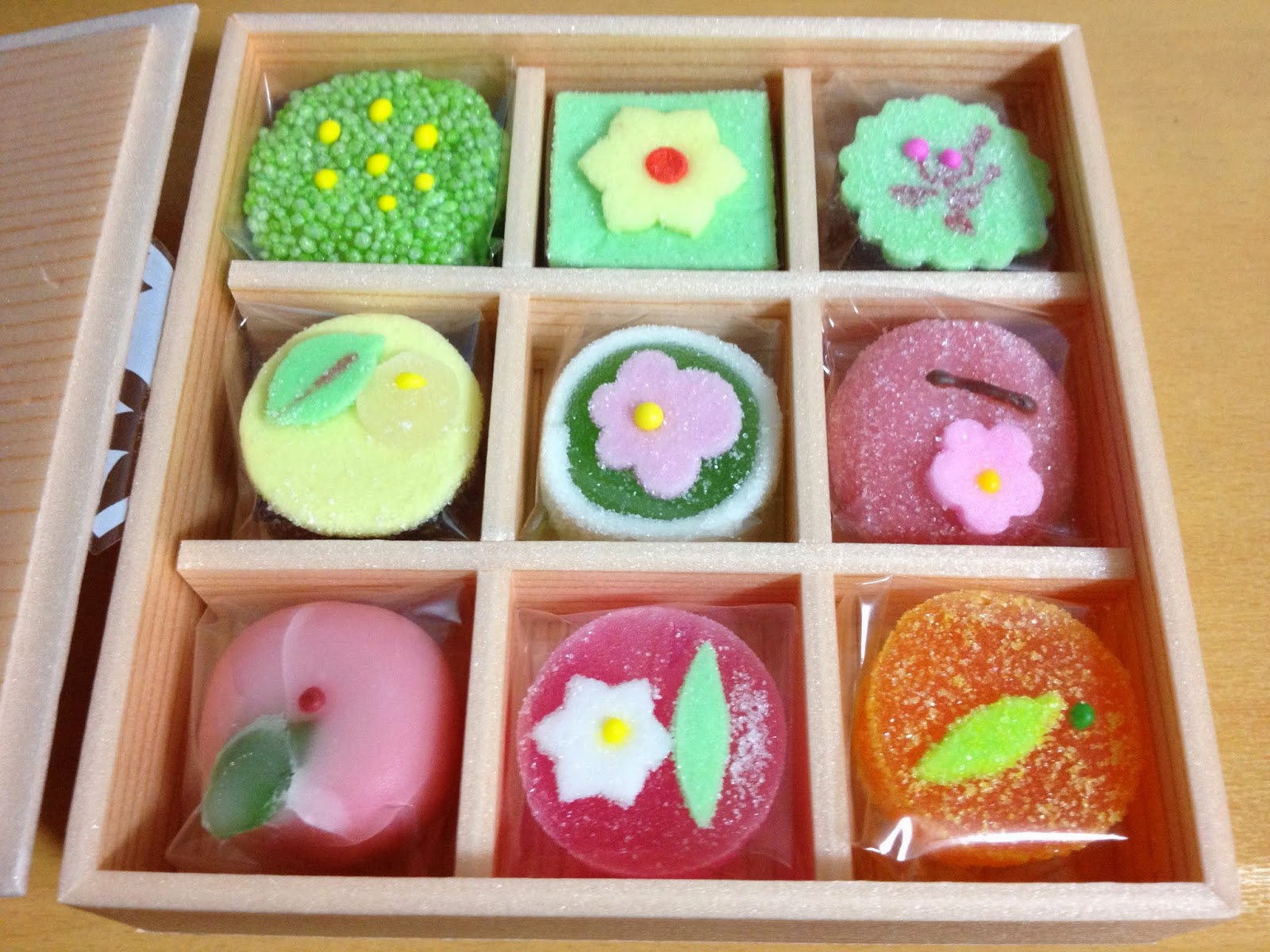 You can see my non-harmonious arrangement above. One of these wasn't really a jelly (top-left) but was okay-tasting; the rest were mild but sweet. They're really beautiful, though! The sweets go by the name of wagashi, and are generally served with tea. As with most Japanese sweets, the base is usually mochi and/or anko, or fruit jellies. I believe the form above is namagashi, a "wet" type made fresh without preservatives.

Japan has an obsession with fruit flavors with dessert, and the fruits themselves are usually fairly expensive still too. Grapes, apples, and strawberries aren't just snacks here. Gummy candies are all over the place with fruit flavors - fine by me, because I love them! These are much milder, but I think they would go great with a cup of tea on this cold winter night!
Posted by Ryan G at 1/21/2015 07:04:00 AM 4 comments:

This time, it was. I browsed around inside briefly; they sell daruma dolls and a few other handicrafts, a few variations of rice crackers, and some clothing. I almost bought a hat that said "Born in Koshigaya" but decided against it. 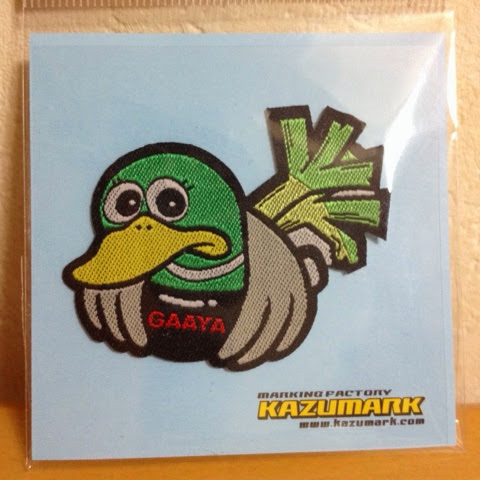 I did get this iron-on patch of Gaaya (Gaya-chan, ガーヤちゃん), the Koshigaya mascot. He is a duck with leeks in a pot. He's not really being cooked, despite his sad appearance on this patch. The pot is actually more like a pair of pants, and the leeks serve as a sort of tail. I think. This is the first time I've seen the mascot, and I had to have a little souvenir of the town I've called home for three years running now. 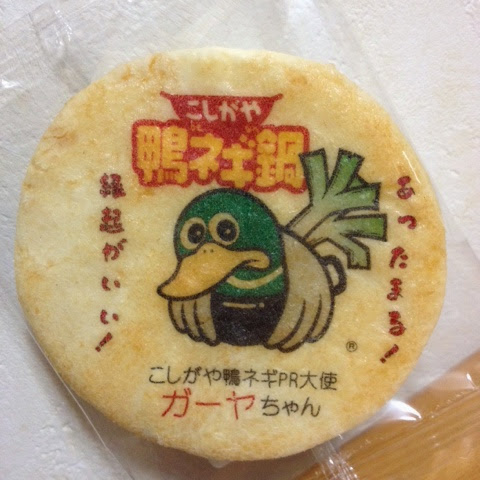 As I mentioned earlier, the store has senbei. I think every town has a "local" senbei, and nearby Soka City is well-known for its senbei. Senbei is a rice cracker, usually seasoned with soy sauce.

Other things I saw in the store related to Koshigaya's local trades include wooden boxes, daruma and other dolls, and a couple different drinks. Additionally, Koshigaya has a small agricultural market and is known for its leeks and chestnuts. The duck comes into play because there is a former hunting ground in northern Koshigaya which is now a park of sorts. Or it might still be a hunting ground.

The store, called the Koshigaya Bussan Exhibition Hall (越谷市物産展示場), is open 10:00-19:00, closed Mondays or the next day if Monday is a holiday. There is a large case of local goods on display, and smaller items are available for purchase around the rest of the shop.

From Koshigaya Station's ticket gates, turn right, then go left to follow the train tracks north. The entrance is at the end of the small shopping center, past McDonalds.
Posted by Ryan G at 1/18/2015 03:45:00 AM 2 comments:

Just take a look for yourselves:
It's got everything you could ask for in a Japanese superhero TV show! A man who transforms into his spandex costume! Faceless bad guys in spandex! Villains in spandex! Motorcycles and machine guns! And giant robots!

Apparently, this is the first superhero-uses-robots show, before even the Super Sentai (Power Rangers) series began. And Spider-Man even fights aliens in Japan!

Marvel's website states there are 41 episodes in all, but it looks like only episodes 1 and 7 are available on their website. Check them out while you can, and hopefully more will be released soon!
Posted by Ryan G at 1/14/2015 06:16:00 AM 2 comments:

Email ThisBlogThis!Share to TwitterShare to FacebookShare to Pinterest
Labels: culture

Too Beautiful to Eat!

Im still trying to get myself organized after returning from my New Year's vacation trip, and hopefully I'll be back to a semi-regular posting schedule after the weekend.
But I wanted to share this beautiful box of sweets given to me by one of my students. I have such wonderful students, not only because of their generosity, but I can't always share details because of privacy concerns.
Anyway, this is a box of six amazing looking sweets! It came in a great box that I'll try to keep too! 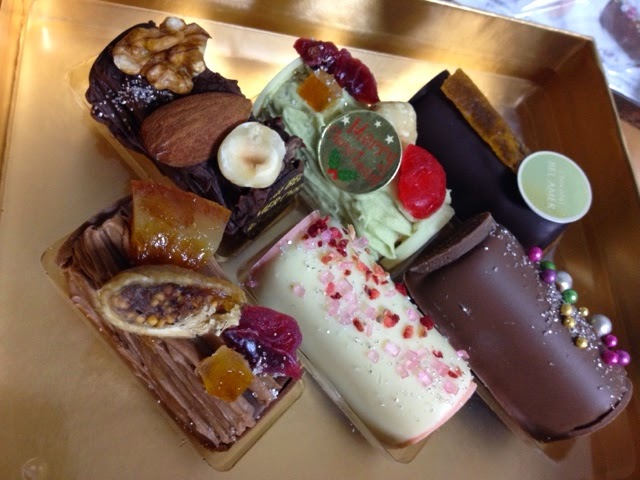 I'm in Osaka right now, probably walking around town. But thanks to the ability to schedule posts, I can make this post go live at midnight California time! 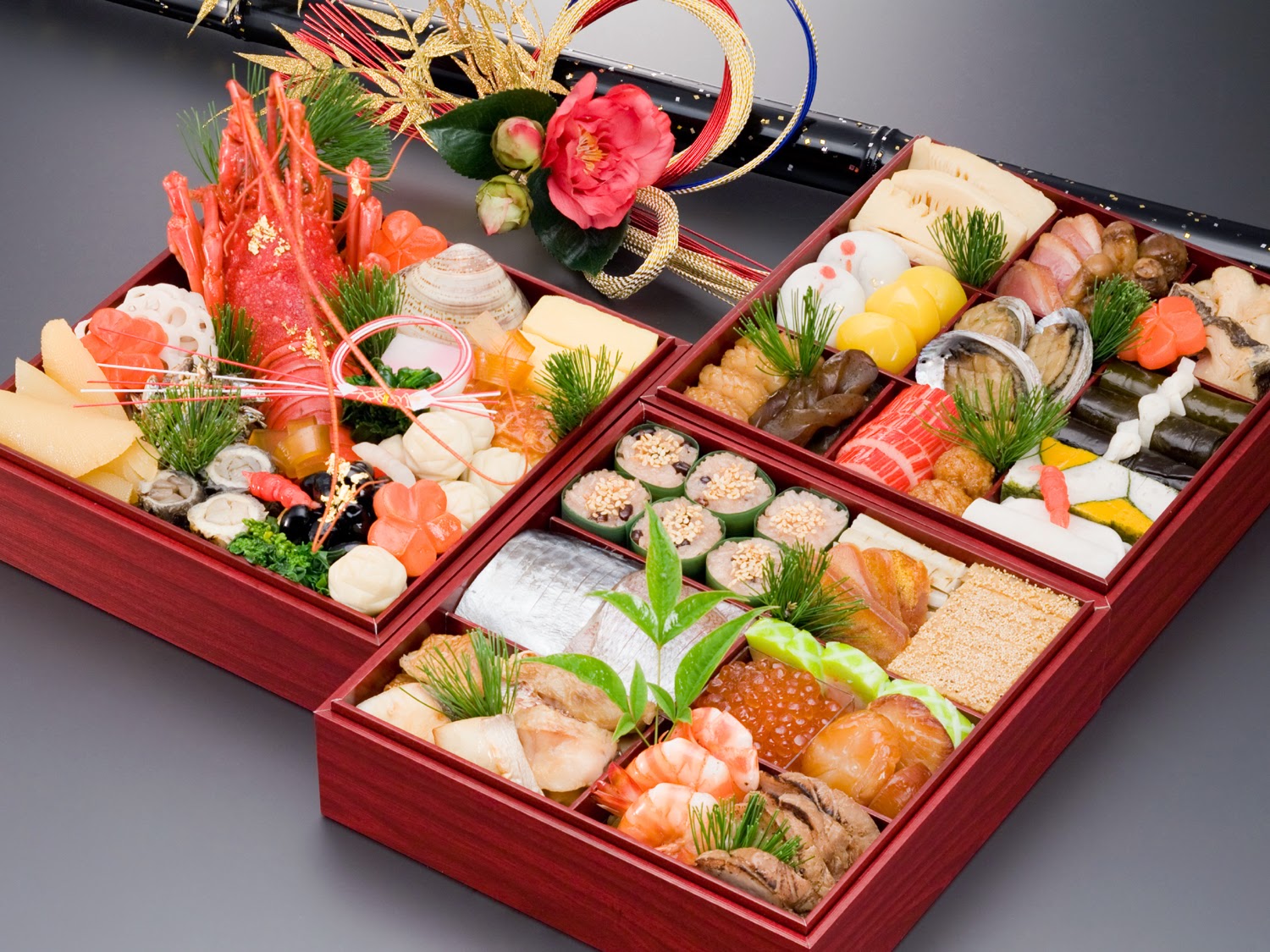 Traditionally, Japanese people don't cook for the first several days of the new year (called oshogatsu). Instead, they prepare osechi for the family, a collection of boxed meals which are served cold. These tend to involve seafood and rice. Osechi sets can be purchased from supermarkets and other stores instead of preparing massive amounts of food, and for those who still follow the tradition it generally only lasts for one day.

My older students are more interested in following the osechi tradition, while younger students, especially the children, don't like it. I think only one of my school-aged students that I asked actually likes osechi meals.

Historically, osechi included only vegetables, but seafood and more recently even western food has been included. They're stored (and sold) in distinctive boxes that resemble bento boxes.

Osechi-ryori are the traditional Japanese foods served in osechi during the new year, and they all have significance. Even the arrangement is important. Soba noodles are an important part of the first osechi meal, too. 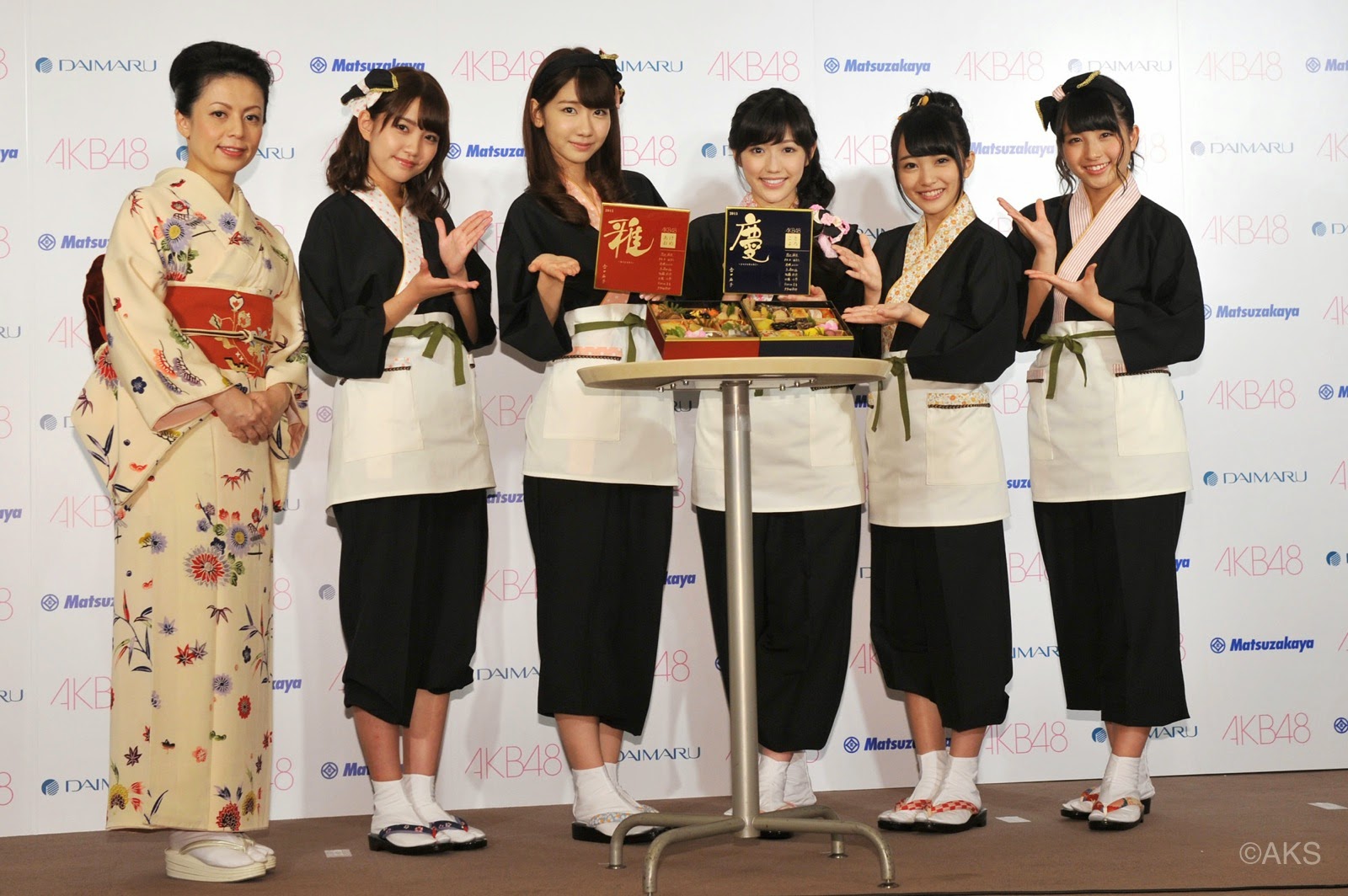 Japan is an ever-changing nation, always fighting between tradition and progress. Recently, there have been more osechi boxes offering western foods, but the real unique osechi are themed. I saw a military-themed osechi a few days ago; the top layer had a very traditional collection of food, but military ration packets were found beneath for the other few days. And the image above features members of J-Pop idol group AKB48, plugging their very own osechi boxes. It looks like the food in these is pretty standard, though I'm sure that box makes a nice souvenir for crazed fans.

You can't buy osechi in restaurants, and unless you're in Japan over New Years it will be very hard to try. And it's not cheap, as boxes start around 10,000 yen (about $100), designed to feed a few people for a few days. Prices can reach $10,000 for the luxury ones made by celebrity chefs, though - and they usually sell out! Given the high cost, I doubt I'll get a chance to try osechi any time soon.