If you don't know what a highball is, I'm not surprised. I don't feel that the drink is really popular in the US, given all of the other mixed drinks available in clubs these days. But thanks to a successful advertising campaign and marketing by Suntory less than 10 years ago, the highball is served in pretty much every restaurant in the nation.

Highballs were popular in post-World War II Japan, too. From the 1950s to 1980s, whisky drinks were popular at izakayas, the Japanese pubs where salary men go to drink and socialize with their coworkers. But like the stereotypical image of a salary man, highball is an old man's drink. Beer grew in popularity and Suntory was going under. In 2008-2009, the company took some steps to try to appeal to younger drinkers.

The Japanese highball is made with Japanese whisky, usually Suntory. It's pretty simple, just whisky and soda water, served over ice in a tall glass like you see below. 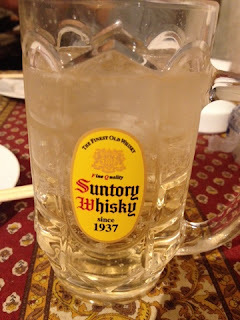 There are several variations on the highball now, such as an "oolong hai" using an oolong tea mixer. And chuhai is a highball drink using shochu liquor. You can buy canned chuhai and highballs in convenience stores now, and bottled Suntory (and other Japanese whisky brands) are on hand to make your own highballs.

What you see above was my first and only highball so far. I drank it Saturday night at a party, and found it to be exactly what you'd expect if you mixed whisky and soda water - a somewhat bubbly watered-down whisky.

So I switched to cola-hai that night, which is whisky with Coca-Cola (or Pepsi or some other cola; Coke is king in Japan but you never know). Cola-hai drinks are sweet, just like you'd expect a whisky with Coke to be. And my favorite drink is Jack and Coke (thanks, Craig, for introducing me to that drink) so it works for me! (I should note that I have had some chuhai at parties too. But that's for another day.)
Posted by Ryan G at 1/17/2016 03:00:00 AM