Singapore is a beautiful city. It's known for its harsh laws on what many consider minor infractions like littering, so it's pretty clean. and the city has worked hard to build a beautiful skyline. The unbelievably popular area around the Merlion is no different. 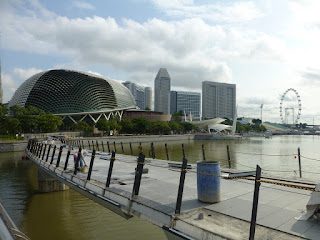 My visit to the famed Merlion statue started from The Esplanade, the arts center located along the waterfront. Enlarge the picture and you'll see that just beyond is an outdoor theater and waterfront seating for shows over the bay. And on the far right side of the photo is the Singapore Flyer, a large, expensive Ferris wheel which apparently offers good views of the rest of the city. I wouldn't doubt it, but I didn't actually visit it on this trip.

Note the pedestrian bridge being built between the Esplanade and the Merlion (to the right out of frame). By now, that bridge should be open, making for a much more peaceful stroll across the mouth of the Singapore River. 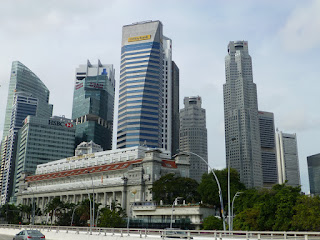 That view centers on downtown, with the skyscrapers reaching up to the sunny skies above. The white low-rise building you see just in front of the vehicular bridge is now The Fullerton Hotel, but was opened in the 1920s first as a post office and the home of the Singapore Club, later holding government offices. It was redeveloped as a hotel which opened in 2001. 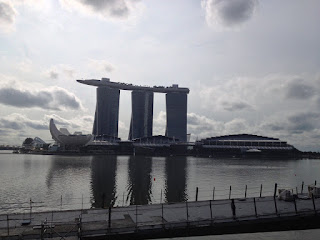 Speaking of hotels, just across the water is the Marina Bay Sands hotel, another icon in Singapore's skyline. It's actually a casino resort with an ice skating rink and a bunch of other amenities. 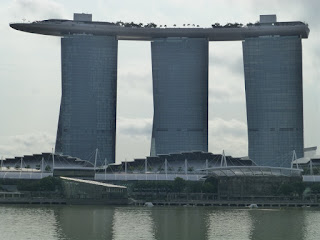 The hotel reminds me of a surfboard balanced on three piers. Again, I didn't have time for a visit, but I would like to go to the top and see those palm trees up close! I think it's pretty exclusive, though - there is an infinity swimming pool up there. 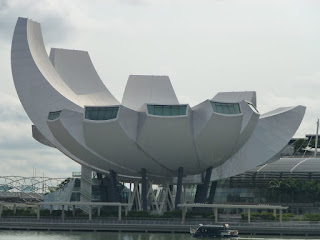 This funky looking building next to the casino is the ArtScience museum. Yet another amazing building that I need to visit. 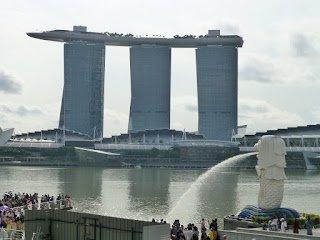 So, how about that Merlion? 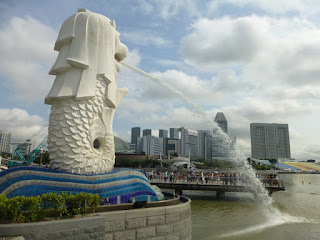 I never made it down to that pier to see the Merlion from the "front" but I was okay with that. This area is absolutely packed with tour groups. 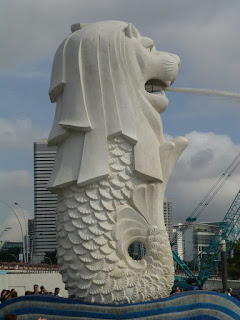 It's a giant white concrete fountain. But everybody loves to visit it for some reason. When our students go to Singapore, the most popular gift they bring back are chocolates in the shape of the merlion. 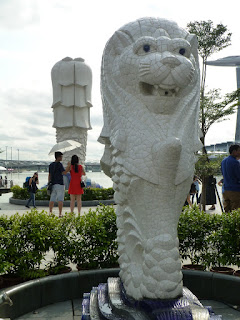 A smaller merlion sits back to back with the large original. 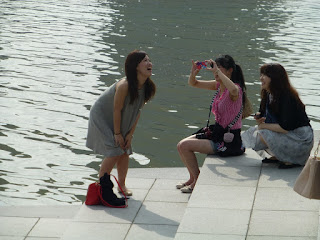 Anyway, the Merlion statue and waterfront area is a short walk from the Raffles Place subway station. Marina Bay Sands is best accessed via Bayfront Station or by walking from the Merlion. The Esplanade center and park are across the river to the north; Esplanade or Promenade stations are both close by. For architecture or walking fans, that whole area has a lot of promise.

The Merlion is very popular and a key stop for all tour groups, so be prepared. Maybe visiting in the afternoon will have lesser crowds; note that the statue is also lit at night and is worth seeing then too.
Posted by Ryan G at 1/11/2016 03:00:00 AM