Four Years: Statistics on the Blog

When I first started blogging five years ago, I paid close attention to the stats. How many people read my blog each day? What kinds of posts did people read? Where did I get comments? I was writing about my hobby, and I had the time and energy to put together one, two, or even three decent posts each day.

Now, four years into this travel blog and five years into my blogging "career", the numbers don't matter so much. Life gets in the way, and posting doesn't happen for months at a time. Ruts are scattered down the road, and I don't write the kinds of stories I want to.

I'm blogging for myself, but I like to see that others are benefiting from my thoughts. And the stats can teach me a bit about what works, and provide at least a little entertainment, too!

So let's see what this blog looks like after four years.

I'm nearly at 200,000 page views for this blog. That's amazing. In fact, I'm averaging over 200 page views per day! That's interesting to note because my newest posts only get about 10-20 page views in their first couple of days.

My busiest month to date was in August 2014, when I had nearly 8000 hits. With a couple months of consistent writing I think I'll beat that this year. 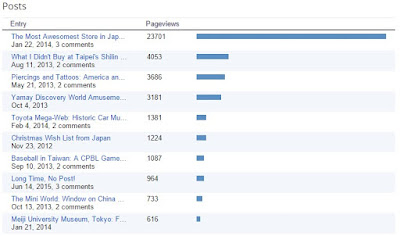 Talk about a runaway hit. My post about Don Quixote, a really fun shop found around Japan, has nearly 24,000 hits. That's followed by a post about a night market in Taipei, and my opinion on tattoos and piercings and observations in Japan. Numbers four and nine are amusement parks in Taiwan, and five and ten are a couple of Tokyo's museums. The Christmas Wish List is surprising, but got a lot of hits when I first posted it. Seven makes sense, since there's not much out there about CPBL baseball, but another oddly popular post is my return to blogging after a three month break. Perhaps the photos are the draw for that one.

Let's look at the keywords to see where the draw comes from. Actually, I can trace several of those to blog posts above. But mongo? Hanayashiki has a post, but why isn't it high on the post list? The peanut butter cup is mentioned in that 2012 Christmas post, but I shouldn't rank high in Google's searches for that. Odd, huh? 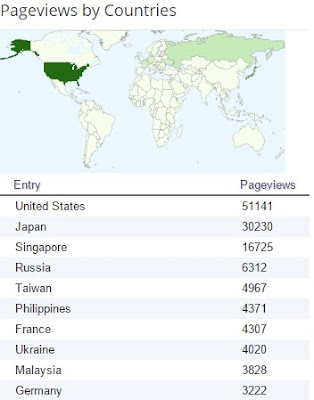 Now, visitors. I'm glad many in Japan are using my blog in addition to US readers. Several other Asian countries are there, too. I'm guessing that most of my visitors, and thus page views, are of tourists or people considering visiting Japan or other countries I've posted about. 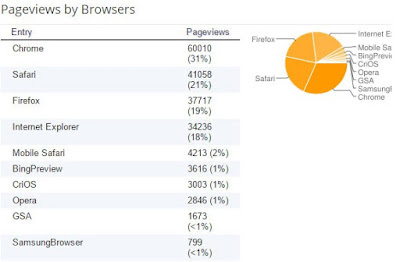 Last, the browsers. Chrome rules, that's good to know. Safari's high ranking plus Mobile Safari confirms the popularity of the iPhone, iPad, and iPod as browsing means. Some Chrome visitors are probably using Android too. I.E. is fourth, and pretty much everything else is small potatoes.

One more statistic that stands out: 320 comments. Some of those are my replies. So most readers are just, well, reading. Sure, there isn't much to say in many of my posts, but 320 is a stark contrast to the number of comments on my hobby blog.

So those are Google's statistics for this blog over about four years. Did I learn anything? Yes, if I want really popular posts I should show photos of pierced women eating peanut butter cups while shopping at Don Quixote. Maybe later.